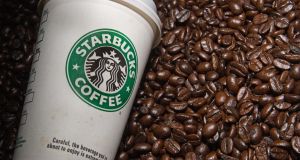 Suchavadee Foley was compensated €12,000 after the Workplace Relations Commission found she had been racially harassed by a Starbucks employee. File photograph: Paul J Richards/AFP via Getty

The boyfriend of the Irish-Thai woman racially harassed at a Dublin Starbucks outlet was wrongly accused of making a “racial slur” during the incident by a witness, it has emerged.

Craig Porter was with his girlfriend, Suchavadee Foley, at the Starbucks outlet in Tallaght on January 12th, 2020, when Ms Foley was racially harassed after a Starbucks employee drew “slanty eyes” on her matcha tea latte cup.

Mr Baneham found that the Brazilian Starbucks employee did not intend to harass Ms Foley but it was clear that the drawing “had a degrading and humiliating effect” on Ms Foley, who moved here from Thailand with her parents when she was aged five or six.

In making the €12,000 award to Ms Foley, Mr Baneham said he took account of the “incorrect allegation” concerning the racial slur made against Mr Porter at the WRC hearing.

The allegation was made by a witness at the hearing who was the Starbucks supervisor on the day of the incident.

The supervisor was no longer employed by the Starbucks company when he made the allegation at the WRC hearing on October 9th last.

Mr Baneham said that the allegation made at hearing was that Mr Porter in a racial slur called the employee a “f***ing black c***” or a “black c***”.

“I find that no such slur was made” in Mr Porter’s interactions with the supervisor, Mr Baneham said.

The supervisor had adopted a professional approach handling the incident and was calm when dealing with Ms Foley, he added.

However, finding against the allegation that Mr Porter uttered the racial slur, Mr Baneham noted “the absence of any contemporaneous documentary evidence regarding the racial slur”.

“One would expect to see an incident report where there is racial abuse directed at or concerning a member of staff. There is no incident report. There is no mention of the racial slur in any of the respondent’s replies to the complainant,” he said.

Mr Baneham also said that he had regard to Mr Porter’s direct evidence at the hearing where he denied making the statement but accepted that he may have mentioned the employee’s race in explaining the effect the drawing had on Ms Foley.

Mr Baneham also took the CCTV evidence into account when reaching his finding that no racial slur was uttered.

“Taking these factors and inferences into account, I find that the complainant’s boyfriend did not use the words attributed to him, ie ‘black c***’ or ‘f***ing black c***’,” he said.

At the hearing, the Dublin Starbucks outlet said that the allegation that Mr Porter had uttered a racial slur had not been mentioned prior to the hearing “as it did not want to get into vulgarities”.