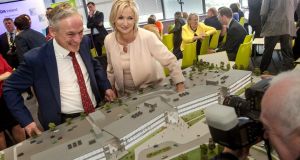 Plans to create 330 new jobs in Co Donegal may be delayed after it emerged that a number of objections have been lodged against the building of a new state-of-the art 1350,000 sq ft office campus by the US firm Pramerica.

The company, which is one of the biggest employers in the county, unveiled plans to build the new facility in Letterkenny, on Wednesday.

The first stage of construction is due to begin in the fourth quarter and the project is expected to be completed by the summer of 2017 with the building tentatively scheduled to open in mid-2016.

However, three separate parties have lodged an appeal with An Bord Pleanála over Donegal Co. Council’s decision to grant planning permission for the new campus earlier this month.

The objections include concerns over possible flooding issues, disquiet over the type of building being proposed and worries about traffic-related problems.

The appellants to An Bord Pleanála include a former local councillor, Laurence Blake, a former council planning official Jim Harley, and Bomac Limited, a company that owns a building adjacent to the new site, which is less than 1 km away from Pramerica’s current offices in Windy Hall.

The new building is to incorporate green technologies for electricity generation and rain water harvesting to reduce its overall impact on the environment.

Pramerica will now have to await the decision of An Bord Pleanála before it can commence construction.

The company is the contact centre and software development division of US-based Prudential Financial, providing services and support for its operations across Europe, Asia and the Americas.

Pramerica ‘s Letterkenny operations began in 2000, and it is seen as the jewel in the crown for the IDA in Donegal.

The company currently employs 1,200 people, 930 at its main offices and at other locations in the town, while a further 270 people work from home.