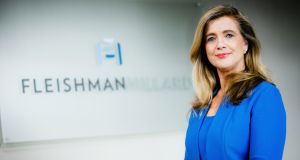 FleishmanHillard managing director Rhona Blake: “we’ve had a very solid 2016 and a really strong second half of the year, particularly in terms of new business wins”

A breakdown of turnover shows €5.6 million of revenues were derived from activities in Ireland, up from €5.2 million a year earlier. A further €1.1 million came from international work, down from €1.3 million in 2014.

The number of employees in Ireland totalled 35 last year, with staff-related costs of €2.8 million.

“We had an exceptional year in 2014, which was mainly due to international work and also a number of one-off crisis projects here in Ireland, so we were coming off a very high base. Looking at 2015, our turnover was up but our profit was down, primarily because of fewer international projects,” managing director Rhona Blake told The Irish Times.

“International business is also up again due to clients such as Expedia and Philips, for whom we are doing a lot of work across Europe, the Middle East and Africa.”

Founded in 1990 by John Saunders, Ms Blake and Julian Davis, FleishmanHillard is part of the marketing and corporate communications giant Omnicom. Mr Saunders was appointed president and chief executive of FleishmanHillard’s global operations in November 2015. The group has over 2,500 employees worldwide across 80 offices in 30 countries. It is estimated to be the world’s third largest PR agency by fee income behind Weber Shandwick and Edelman.