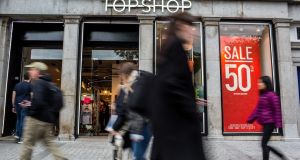 Sir Philip Green’s Arcadia retail empire has laid bare the state of its finances in the year before its move to shake up the business with a radical recovery plan.

In annual accounts for the year to September 2018 filed to Companies House, the retailer’s holding company, Taveta Investments, reported a loss of £177.3 million (€198 million).

The group said it had incurred £217.1 million of exceptional costs, which meant it swung to a loss despite making a profit on an underlying basis.

It compares to a profit of £49.4 million posted in the previous year.

The accounts show the health of Arcadia’s business in the run-up to a series of Company Voluntary Arrangements, which it proposed in May as part of a wider three-year recovery plan.

Landlords eventually voted through the plans in June, giving the green light to close 23 stores and slash rents on many more, though Sir Philip and his wife were forced to offer some concessions funded from their own pockets to get approval for the measures.

Other elements of the recovery plan included pushing its US operations into administration and shuttering an additional 25 Evans and Miss Selfridge stores.

However the group revealed in its latest filings that the recovery plan faces another obstacle later this year when the mortgage on its Oxford Street store comes up for renewal.

The mortgage of £310 million on the address was due for repayment in June this year, but the facility was extended until December. Arcadia is in discussions to secure fresh financing for it.

The building has been partly let to other brands as Arcadia seeks to minimise its costs.

Vans is to take over the former Miss Selfridge portion of the building, while current tenant Nike has expanded its store to an additional floor.

Arcadia said it was confident of getting new finance with a reasonable rate of interest.

Meanwhile, the group revealed that it is to list its brands with high street retailer Next, following similar moves to partner with both Asos and Very as third party sellers. – PA

1 Wetherspoon’s panto-villain chairman may have the last laugh
2 British exceptionalism backfires in style as Johnson tests positive for coronavirus
3 UK needs to be honest about its Covid-19 strategy
4 Retail landlords worried rents will dry up during Covid-19 crisis
5 Volkswagen burning through €2bn in cash per week
6 Will Covid-19 force Primark to rethink decision not to sell online?
7 Remote working doesn’t suit everyone, and it exposes woolly leadership
8 Mobile, broadband suppliers to be given extra radio spectrum
9 ECB orders banks to freeze dividends and share buybacks
10 Usit travel group in liquidation due to coronavirus crisis
Real news has value SUBSCRIBE