PepsiCo forecasts surprise drop in profit as it ramps up investments 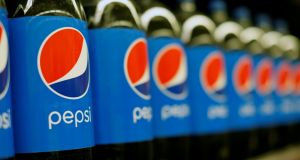 The company has boosted advertising for its drinks, including Pepsi. Photograph: Mario Anzuoni/Reuters

PepsiCo forecast a surprise drop in full-year profit on Friday, as the snack and beverage company spent heavily on marketing and developing new products in a bid to claw back market share from Coca-Cola.

The company has boosted advertising for its drinks – Pepsi, Diet Pepsi and Mountain Dew – and is also investing heavily in its snacks business to offer products with new flavours, healthier preparation methods and attractive packaging.

“[This] has caused us to want to invest more money back into the businesses in 2019 and that is why our guidance has landed where it has.”

The company said it expected 2019 adjusted profit per share to drop 3 per cent to $5.50, while analysts on average had expected a 3.5 per cent rise to $5.86 per share, according to data from Refinitiv.

The forecast also takes into account a higher tax bill and a 2 percentage point hit from a stronger dollar.

Coca-Cola also warned on Thursday that its earnings per share could fall in 2019, citing a stronger dollar. The forecast pushed its shares down nearly 9 per cent.

PepsiCo’s shares were up 1 per cent in early trading on Friday.

“As was the case yesterday with Coca-Cola, all eyes are on PepsiCo’s 2019 outlook. While organic sales growth guidance suggests topline strength should continue, EPS suggests the cost of achieving that growth is increasing,” Wells Fargo analyst Bonnie Herzog said.

However, operating profit at the unit fell 12 per cent in the fourth quarter.

Revenue and profit were in line with expectations. The company also announced a 3 per cent hike in annual dividend to $3.82 per share. – Reuters