The back door into the grey world of online gambling 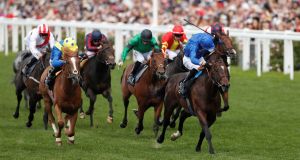 It was the filly’s first outing since October, according to the Racing Post. She came in with a strong late run under jockey Tom Marquand for a “short-head victory”.

Yet the performance would have been all the more profitable for Mr Madgwick if he had followed the lead of the Financial Times.

As part of an ongoing investigation into the grey world of online gambling, FT reporters had also placed money on Miss Recycled – at even longer odds of 250-1. A small wager paid out close to £2,000.

The bet was placed on the Betfair Exchange, a peer-to-peer gambling platform operated by Flutter Entertainment, better known in Ireland as Paddy Power Betfair, a FTSE 100 sports betting group that boasts six million customers around the world and a £4.8 billion market capitalisation.

Although Betfair imposes strict compliance procedures on its UK customers, the FT’s experiment highlights a loophole that allows anonymous gamblers – sitting in countries where betting may be illegal – to avoid checks on their identities and the provenance of their money.

Until January 1999, “PTE” was the foreign exchange symbol for the Portuguese escudo. Nowadays it is the accepted code for euro in the opaque world of agents, brokers and clone websites that quietly route money from a variety of countries where betting may or may not be legal to Betfair’s closely regulated gambling platform in the UK.

It is a world where so-called “know your customer” checks and other anti-money laundering controls are applied rather less stringently than in countries such as the US or Britain – if, indeed, they are applied at all.

Betting industry executives and experienced professional gamblers claimed to the FT that large amounts of dirty money and illegal gambling could be flowing through to the Betfair site given weak regulatory enforcement elsewhere.

Flutter/Paddy Power disputed this, and stated that revenue derived from a small network of what it calls B2B partners is “immaterial” to the group, making up less than 1 per cent of its £2 billion in annual sales. It said all of its partners are expected to impose full checks on end customers.

The long-odds punt on Miss Recycled was an attempt to test this.

Using a simple Gmail address, FT reporters set up an account at AsianConnect88, a gambling agency registered in Curaçao, the Dutch Caribbean island that has operated a light-touch gambling registration service for more than 20 years. Funds were lodged with AsianConnect via Neteller, an e-money transfer service.

AsianConnect then provided anonymous-looking login details for a website called 9wickets, one of Betfair’s business-to-business partners which, under a master agreement with the UK company, clones the gaming prices displayed on the main Betfair betting exchange. The long-shot bet on Miss Recycled was placed by user “wick1069” through 9wickets and instantaneously “matched” by a gambling counterpart on the main Betfair platform.

Gambling companies such as Flutter are expected to perform strict checks on identity and source of funds. A spokesperson for the Gambling Commission, which acts as regulator in the UK, said: “Ultimately, a [regulated] licencee must assure themselves that they are acting in a lawful manner, and failure to do so would bring into question their suitability to hold a commission licence.”

Testing the know-your-customer principle, the FT invited Flutter to identify the winner of the 250-1 long shot at Brighton; the company declined on privacy grounds.

The FT then invited Flutter to send a congratulatory email directly to the lucky punter; no such email had arrived by the time of publication.

With the same identity used for the AsianConnect account, the FT also set up an account with Betfair in the UK, going through stringent identity checks that extended to the uploading of a birth certificate.

Flutter was asked whether the effective creation of two accounts by one individual for use on Betfair amounted to a fundamental breach of its anti-money laundering controls, but the company declined to answer, citing commercial sensitivities.

Gamblers and rival betting companies claim that, without tight controls on identity, peer-to-peer gambling exchanges like Betfair offer an easy mechanism to clean tainted money and in the process transfer it from anywhere in the world to a jurisdiction like the UK.

Flutter said: “All our B2B partners are licensed operators, and they are held to a high standard of verification. We conduct enhanced due diligence on the B2B partner, relevant related parties and their respective operating licences before entering into any relationship. Our partners are also subject to ongoing review throughout the course of the relationship.”

Partners are required to provide full individual account information to Betfair upon request, with the company adding: “As licensed operators, all our B2B partners adhere to the ‘know your customer’ requirements specified by their [local] licensing authority.”

Access to 9wickets – like another Betfair B2B partner Orbit Exchange – is blocked to regular internet users in the UK, but the sites are failing to block covert gambling in countries where online betting is largely banned, such as the US and India. Betfair’s application programming interface is hard-wired into these sites’ source code, allowing them to replicate Betfair’s gambling odds and liquidity pool.

Describing themselves as being “Powered by Betfair”, the companies operating these clone websites have taken measures to keep their ownership and management completely opaque, typically using the offshore services of Curaçao.

The Curaçao Gaming Control Board did not respond to requests for comment.

Other “Powered by Betfair” sites identified by the FT include AB Exchange and Betchips. None of the Betfair clone sites responded to requests by the FT for comment.

Ordinary customers are not able to sign up directly to these partners. Instead a secondary network of affiliate broker websites, with their own network of individual agents or brokers, provide gamblers with login details.

Alongside AsianConnect, at least a dozen major affiliates are funnelling customers to the clone Betfair sites, with each affiliate having their own network of individual agents and brokers.

Some of these affiliates openly claim that customers’ identities will not be passed on to the clone sites or to Betfair itself. Others require no identity checks at all, but nonetheless promise direct access to Betfair’s odds and liquidity.

The clone sites, along with their affiliates and agents, accept bank transfers or cryptocurrency payments through e-payment services such as Skrill and Neteller, or through informal hawala cash transfer networks.

Active online gamblers told the FT that a favoured hub for turning cash discreetly into online gambling funds is the Deira district in Dubai, where scores of foreign exchange transfer agents are based.

Betfair applies a 2 per cent commission on all winning bets that come through the partners’ sites. The clones are required to route at least 50 per cent of their business through to the Betfair exchange, taking the remaining gambling risk on to their own books. Customers of the clones typically pay a total winning commission of 3.5 per cent, compared with the standard 5 per cent levied by Betfair in the UK.

Although Flutter claims that its B2B partnerships are immaterial to the business at a group level, there are serious amounts of money being bet on the platforms.

Betfair announced in January this year that it would no longer accept bets from Indian accounts, but the 9wickets site and numerous affiliates are still accessible from Indian internet domains.

Similarly, while gamblers in South Africa were banned from Betfair seven years ago, partly in response to suspicions that the platform was being used to circumvent the country’s currency controls, gambling sources told the FT that at least 500 “whales” – high-stakes gamblers – were accessing Betfair through a B2B partner.

Any ambitions among FT reporters to join the ranks of these high rollers are on hold, however. After the FT sought comment from Betfair for this article, the 9wickets account for user “wick1069” was first suspended and the Miss Recycled winnings frozen, pending an investigation. The money has since vanished. – Copyright The Financial Times Limited 2019