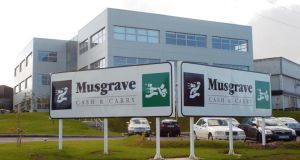 Musgrave is investing €8.2 million in an expansion of its Dublin logistics centre it says will create 145 permanent and temporary jobs

Musgrave, the Cork-headquartered retail and wholesaling group, is investing €8.2 million in an expansion of its Dublin logistics centre it says will create 145 permanent and temporary jobs.

Musgrave Retail Partners Ireland (MRPI), the division of the company that owns the Supervalu and Centra franchises and supplies both store networks, has started work on the premises in Fonthill, west Dublin. It hopes to complete construction and open the facility next July.

The company says the expansion, which will boost the site’s capacity by 60 per cent, will create 80 jobs directly at the plant, bringing the total employed there to 335. The new jobs will include roles for managers, drivers and warehouse operatives, it said. MRPI estimates a further 65 construction jobs will be sustained throughout the building phase.

Martin Kelleher, the managing director of MRPI, says the 57,000sq ft expansion will allow the site to reach its “full potential . . . and guarantees greater availability of produce” at Supervalu and Centra stores.

The Fonthill centre supplies chilled foods to Supervalu, which has 223 mostly franchised stores nationwide, and Centra, which has 465 franchised stores. MRPI operates other logistics centres in Cork, which mainly serve the south, and Kildare, which deals with ambient products.

The expansion of the Supervalu network to include the 24 Musgrave-operated former Superquinn stores, rebranded in February, inflated the number of stock lines, putting pressure on existing logistics.

The Fonthill expansion is designed to cope with this additional pressure.