Localised lockdowns prompt shoppers to stock up on groceries 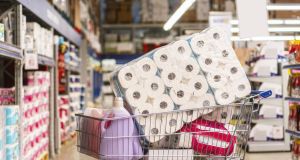 Retailers benefitted from the reopening of schools in September with sales of baked morning goods up 11% and lunch box staples like yoghurt drinks and juices growing by 17%. Photograph: iStock

Localised lockdowns in the State prompted shoppers to stock up on groceries again, with Dublin seeing the strongest growth in take-home grocery sales, according to figures from retail analysis group Kantar.

An additional €19 million spent on groceries during the past month compared to the same period in 2019 coincides with the start of local lockdowns. “This suggests that local restrictions are already making their mark,” said Kantar retail analyst Emer Healy.

While sales growth in the Republic’s grocery retail market as a whole grew 13.7 per cent in the 12 weeks to September 6th compared to the same period last year, that represented a slower pace of growth than had been seen in recent months. This suggests shoppers are starting to return to pre-pandemic shopping habits.

However, over the past four weeks habits have shifted again, with people visiting grocery stores more frequently than they did in June.

And despite the economic uncertainty branded goods have proved to be a standout performer, growing ahead of the market by 18 per cent and outpacing private label sales year-on-year.

Retailers benefitted from the reopening of schools in September with sales of baked morning goods up 11 per cent and lunch box staples like yoghurt drinks and juices growing by 17 per cent. Sales of tissues and wipes are up 2 per cent and 15 per cent respectively.

In the league table of grocery retailers SuperValu takes first place in this survey with a 22.1 per cent market share.

Dunnes Stores and Tesco were in second and third place respectively with a market share of 21.3 and 21 per cent each. SuperValu witnessed growth of 17.2 per cent in the period compared to Tesco’s 11.7 per cent growth.

Kantar’s data shows that the popularity of online grocery shopping continued, with online sale up 121.7 per cent over the past four weeks.

“This represents another month of record-breaking growth for the online channel, and digital sales added €72.9 million to the total market in the latest 12 weeks.

Grocery market inflation, meanwhile, stood at 2.2 per cent for the 12-week period.

Kantar’s data is based on the household purchasing habits of 5,000 demographically representative households in the Republic.