Barnes & Noble to be bought by owners of Waterstones 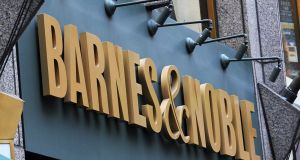 Elliott’s acquisition of Barnes & Noble, the largest retail bookseller in the US, follows its June 2018 acquisition of British bookshop chain Waterstones. Photographer: Bloomberg

Barnes & Noble is to be bought by hedge fund Elliott Management for $475.8 million (€421 million), marking the end of the once-dominant US book retailer as a public company.

Elliott’s acquisition of Barnes & Noble, the largest retail bookseller in the US, follows its June 2018 acquisition of British bookshop chain Waterstones, which also operates in Ireland. In Dublin, the group owns Hodges Figgis.

The offer of $6.50 per share, represents a premium of about 42 per cent as of Wednesday’s close, a day before media reports of a potential transaction surfaced.

The company’s shares surged about 34 per cent on Thursday after reports of a potential deal, and were trading up 8.2 per cent before the bell on Friday, slightly below the offer.

In recent years, Barnes & Noble had struggled to grow its business after the arrival of Amazon. com, which started as an online marketplace for books, and also as more Americans started playing videogames in their leisure time.

The deal with Elliott will end the company’s strategic alternatives review that was announced in October.

James Daunt, chief executive of Waterstones, will also take the top job at Barnes & Noble, following the completion of the transaction, expected in the third quarter of 2019.