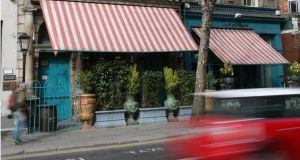 Up to €3 million will be spent on a major upgrade of Cafe en Seine on Dawson Street in Dublin. Photographer: Dara Mac Dónaill

The Mercantile hospitality group behind top Dublin nightspots such as Cafe en Seine and the George is lining up a €20 million investment programme, after its warring shareholder blocs formally ended a bitter legal wrangle on Monday.

Three sets of proceedings, involving former chief executive Frank Gleeson and a US-Irish consortium that owned the majority of Mercantile, were struck out by the High Court.

These included the shareholder oppression case taken by Mr Gleeson involving various allegations against his fellow directors and shareholders. This has been withdrawn and a €4.6 million debt case against Mr Gleeson was discontinued, along with an injunction he had sought against his dismissal.

The 11 venues in the group have been split between the two sides. Mr Gleeson will take control of restaurants Green Hen and Marcel’s, as well as the fashionable Farrier & Draper bar in Dublin’s Powerscourt Townhouse Centre. He will also walk away with two suburban Dublin pub sites that featured in the debt case.

The majority shareholders of Mercantile, including US-Irish building magnates Maurice Regan and Michael Breslin and also Danu Partners, comprising Mark O’Meara and Setanta founders Leonard Ryan and Mickey O’Rourke, will take full ownership of the rest of the Mercantile group.

It is understood that one part of the group, the East Side Tavern leasehold asset near St Stephen’s Green, will be reassigned to a third party for a nominal sum. Much of the rest of the group, including major Dublin venues such as the Mercantile Hotel, Opium and Whelan’s, is set for a revamp.

The bulk of the investment budget will be spent on a scheme to more than triple the number of bedrooms in the Mercantile Hotel on Dame Street to about 100. It is understood that the Mercantile group is in advanced talks to buy the freehold on the property from a family of investors.

Work on the Mercantile, located in one of the busiest tourist locations in the city, is not expected to begin until September next year and is expected to be carried out by a building firm linked to Mr Breslin.

Opium, which sits next to Whelan’s live music venue, will close in two weeks’ time for a three-month period, to facilitate a €2 million refurbishment of the vast premises.

A further €1 million will be spent refreshing Whelan’s and the George, which will see a significant fit-out of its adjoining Bridie’s Bar. The group recently completed a €2 million upgrade of nearby Nolita.

Up to €3 million will be spent on a major upgrade of Cafe en Seine, for which Mercantile is obtaining landlord’s consent before it submits its plans. While Mr Gleeson will lose control of the largest venues, including ones he founded such as Whelan’s, he will essentially walk away from the dispute with a number of unencumbered assets and sought-after city leaseholds.

It is about 18 months since Mr Gleeson merged his Mercantile group with the then-named Capital Bars group owned by the shareholders. The two sides swiftly fell out over strategy and finances, however, sparking the legal wrangle and asset split that forms the basis of the settlement agreement.

Patrick Burke, joint chief executive of Mercantile, welcomed the end of the dispute and said it was focused on “ investing to enhance and grow the offering in the years ahead”.