Households to spend average of €2,700 on Christmas shopping 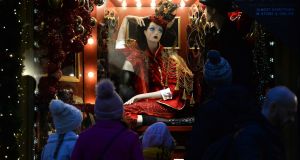 Reports of the death of Irish retail appear to have been somewhat exaggerated, with new data published suggesting that Irish households will spend just under €2,700 on average this month, up 3 per cent on last year’s festive season.

In its Christmas Retail Monitor, Retail Ireland – the Ibec unit that represents the sector – has predicted Irish households will spend an average of €2,690 in shops this December, up €866 on any other month this year.

However, the report says that with a greater number of shoppers here now choosing to purchase on overseas websites, “the challenge for Irish retailers will be to ensure that this buoyancy is felt locally and that Irish retailers benefit from this anticipated additional spending”.

Retail Ireland director Thomas Burke said 2018 had been a “tumultuous year of highs and lows” for retailers here and added that a “crucial juncture” had been reached in determining the end-of-year position for the sector.

He pointed out that consumer sentiment “has dipped somewhat in recent weeks” largely as a result of fears around the impact of external factors such as Brexit.

Mr Burke said there was “no doubt the spending power is there. The challenge now for retailers is to best position themselves over this key trading period to convince consumers to part with that hard-earned cash in their stores and through their various other sales channels”.

He said a strong online performance over the recent Black Friday weekend had hit footfall in traditional bricks-and-mortar outlets but he said local retailers were reporting “a significant increase” in sales in their own online stores also.

The report suggests that while the supermarket sector expects to show year-on-year growth in both volume and value terms, early indications are that heavy discounting is taking place further out from Christmas than in previous years, particularly on alcohol, seasonal confectionery and biscuits.

The discounting of fresh produce in the week before Christmas is not expected to be as deep in 2018 as in previous years.

Central Bank of Ireland statistics indicate that ecommerce spend is likely to exceed €16 billion before the end of the year, up 50 per cent since 2015. Online sales growth is running at 10 times that of traditional bricks-and-mortar outlets.

1 Son putting elderly dad under pressure to sign over land
2 How to gift your child a house deposit . . . tax free
3 BOI customers to be charged twice with bank fees on New Year’s Eve
4 Family in court dispute over hotels in Dublin and Galway
5 Stripe in talks for new funding at much higher valuation
6 Ryanair warns it may reduce more Irish services and relocate operations
7 City of London makes late scramble to limit Brexit disruption
8 Irish designer of Oxford vaccine: ‘I’ve never worked so hard in my life’
9 CRH eyes return to acquisitions and mergers in 2021
10 Workers have little idea of the cost of retirement income
Real news has value SUBSCRIBE