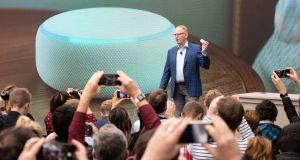 Apple and Amazon appear to be embracing the festive spirit of peace to set aside their years-long rivalry in smart speakers and music streaming.

Just in time for Christmas, Apple Music is set to launch on Amazon’s Echo speakers on December 17th, the two companies announced on Friday. Echo owners will be able to ask Amazon’s Alexa assistant to play tracks, albums and playlists.

The tie-up marks the first time that the Apple streaming service, which the FT reported earlier on Friday now has 56 million subscribers around the world, can be controlled by another company’s virtual assistant. Previously, Apple Music – which is already available on Android smartphones as well as iPhones – could only be commanded by voice using Siri.

Apple Music has long been available on Sonos’ connected speakers but Amazon’s Echo is a close competitor to Apple’s own Siri-powered HomePod device. Sales of the high-priced HomePod have been slow, however, and many more iPhone owners already have Echo speakers in their homes.

Over the Thanksgiving holiday and ‘Black Friday’ shopping frenzy in the US, HomePod sales had their best week since the speaker’s launch in February, Apple said.

Amazon’s Echo already supports a wide variety of third-party music streaming apps, including Spotify and Pandora, in addition to its own Music Unlimited and Prime services.

As well as offering rival speakers and digital music services, the two companies have sparred over ebooks – including in the courts. In 2016, Apple had to pay a $450 million (€395 million ) settlement after the US Department of Justice accused it of conspiring with publishers to raise ebook prices.

Apple still denies any wrongdoing and has consistently pointed to the dominance of Amazon’s Kindle in ereaders.

Friday’s detente between Alexa and Siri is just the latest sign in a thawing of Apple and Amazon’s relationship. Earlier this month, Apple struck a deal with Amazon to sell its iPhones and iPads directly on the ecommerce site.

“Music is one of the most popular features on Alexa – since we launched Alexa four years ago, customers are listening to more music in their homes than ever before,” Dave Limp, senior vice-president of Amazon’s devices business, said in a blog post. “We’re thrilled to bring Apple Music – one of the most popular music services in the US – to Echo customers this holiday.”