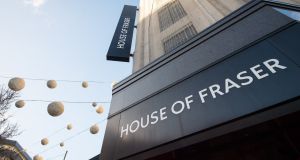 House of Fraser’s financial position “deteriorated significantly” in the year before the British retail chain went into administration and was bought by Sports Direct last week, new documents from administrator EY show.

Draft accounts for the year to January 27th show the group made a pretax loss of £4.1 million (€4.6 million) and suffered a “net cash outflow” of £65 million.

It was a particularly bad spring for the retailer, which recorded a 7.7 per cent decline in turnover in the 13 weeks to April 28th in comparison with the same period in 2017. Its earnings also declined sharply in this period.

The company employs 5,872 people, while some 10,000 people are employed by the fashion concessions that operate within its stores.

Sports Direct’s owner, the billionaire Mike Ashley, has indicated that he plans to keep 47 of the 59 stores open. Its store in Dundrum Town Centre, the only one in the Republic, is not expected to close.

The Dundrum store has been excluded from the sale at this stage “pending the resolution of local regulatory matters”, EY said. “The store is continuing to trade with a view to completing a transfer to the purchaser in due course.”

Meanwhile, House of Fraser has apologised to customers after cancelling all orders placed online. The beleaguered retailer said it had wiped all orders that had not already been sent to customers and would be issuing refunds.

The move comes after the chain’s website was taken offline amid complaints from customers about delayed deliveries since the company was bought by Sports Direct for £90 million.

The issue stemmed from a dispute involving employees at a key warehouse, according to a report in the Times.

House of Fraser said on Thursday that it had seen “significant delays” with delivering online orders. “We have taken the decision to cancel and refund all orders that have not already been sent to customers,” the department store said on Facebook.

“We didn’t take this decision lightly, but since we cannot give our customers clear assurances of when their orders will be delivered, we believe cancellation is the best option. All customers affected will receive an email about the cancellation and refund in the next couple of days.

“Please accept our apologies for any inconvenience caused and thank you from everyone at House of Fraser for your patience at this time.”

A message posted on the retailer’s website said it was “working hard to make some improvements”, telling customers it will be “back up and running as soon as possible”.

The Times reported that employees at a key warehouse supplying products to House of Fraser stores and online shoppers had downed tools in a wrangle over delivery payment terms with Sports Direct.

The paper said it understood that workers at the chain’s distribution centre in Wellingborough had been told by XPO Logistics, which operates the site, to stop accepting goods and processing deliveries, leading to product shortages in some House of Fraser outlets.

Sports Direct owner Mike Ashley said his ambition was to turn the department store into the “Harrods of the high street” after buying the firm from administrators earlier this month.

Signs were erected outside the Dundrum store last weekend, on the instruction of EY, declaring that the retailer will “unfortunately” no longer be able to accepting gift cards or vouchers as a form of payment “until further notice”. – Additional reporting: Press Association.