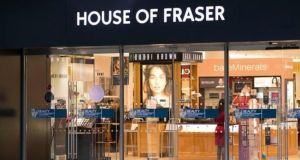 At House of Fraser’s Dundrum outlet signs have been erected saying the retailer will no longer be able to accepting gift cards or vouchers as a form of payment “until further notice”.

Irish shoppers hoping to use a House of Fraser or Dundrum Town Centre gift card to make purchases at the Dundrum branch of the UK chain won’t be able to do so for the foreseeable future, as administrators of the Irish arm have told customers it won’t accept them.

The decision follows Friday’s announcement that the troubled chain of 59 stores was acquired by Mike Ashley’s Sports Direct chain for £90 million (€100 million). The 169-year old retailer had been struggling with rising rents and went into administration on Friday, when talks with its creditors failed to reach an agreement.

A deal was subsequently struck with Sports Direct, although the takeover does not yet apply to the Dublin-based department store.

A spokeswoman for administrator EY said on Friday that the takeover of the Irish store would take longer, due to regulatory matters, but the store has already been affected as a result of the administration.

At the Dundrum outlet new signs have been erected on the instruction of the administrator, declaring that the retailer will “unfortunately” no longer be able to accepting gift cards or vouchers as a form of payment “until further notice”.

“This will include €10 bounce-back vouchers,” the notice says. Earlier this summer the chain had offered consumers who spent €50 in the store a voucher for €10 back off a further purchase. The vouchers were due to run out on August 12th, but last-minute users will have found themselves unable to avail of them.

The notice refers not just to House of Fraser gift cards but also to users of the Dundrum Town Centre gift card, which had previously been eligible for use at the store. Customers at the Dublin store have been told that it will send their details through to the administrators, but it is not yet clear whether or not they will be refunded.

Shoppers with loyalty cards through the retailer’s “recognition rewards” scheme may also find that they are unable to spend their “rewards”.

In the UK, Sports Direct has declared that “it has no liability to customers in possession of existing gift cards and vouchers”, but that customers can send their cards to House of Fraser head office at Gift Cards, 27 Baker Street, London, W1U 8AH, “whereby replacements will be issued”.

It is also not yet clear what the new owners’ plan might be for the 100,000sq ft Dundrum store, which opened with the centre in 2005 and occupies a flagship position at the shopping mall. The store employs some 200 people, as well as concession staff.

Ahead of the Sports Direct deal, House of Fraser had intended to close 31 of its 59 stores in January 2019, including those in Edinburgh, London’s Oxford Street and Wolverhampton. Dublin was not among those selected to close.

Announcing the takeover, Mr Ashley said: “We will do our best to keep as many stores open as possible. We look forward to turning House of Fraser into the Harrods of the High Street.”