Out of the frying pan and into the fire for House of Fraser? 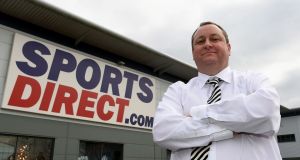 Mike Ashley, founder of Sports Direct. An investigation found he was running the company like a “Victorian workhouse”. Photograph: Joe Giddens/PA Wire

House of Fraser is no Brown Thomas, Selfridges or Saks Fifth Avenue. The retail outlet is middle of the range, appealing neither to the higher-end consumer nor the mass market.

Nonetheless, it has punched above its weight, cementing its place on the high street as a symbol of style and variety since its foundation in Glasgow in 1849.

Some will be concerned then that its new owner is a less-than-savoury character known for holding management meetings during pub lock-ins and for his mistreatment of staff.

The beleaguered retailer was acquired out of administration by the billionaire owner of Newcastle United and Sports Direct, Mike Ashley. Ashley is near, but not quite on a par with, Philip Green on the list of UK corporate hate figures.

Disliked by fans of Newcastle for his tight rein on the club’s purse strings, on one occasion he is alleged to have agreed a business deal in a pub. He later dismissed the pub discussion as “banter”, having consumed about 12 pints and chasers before vomiting into the bar’s fireplace.

In 2016, an inquiry into working practices at Sports Direct in the UK after a newspaper investigation found the company was paying staff less than the minimum wage found Ashley had been running the company like a “Victorian workhouse”, treating his workers as “commodities rather than as human beings”.

But let’s not forget that House of Fraser was on the verge of collapse and suitors weren’t exactly rushing to its aid.

Its 17,000 staff will likely be pleased that a buyer has been found, securing their jobs and perhaps the company’s future. Without Ashley, the chain would likely have disappeared – just another British high street casualty in what is proving a tumultuous year for retail.

With him, the chain will survive. Just don’t expect it to resemble the House of Fraser of the Mohammed Al Fayed era, despite Ashley’s ambition to transform it to the “Harrods of the high street”.

Just days ago, the retailer’s future looked extraordinarily bleak. Whether that outlook has changed remains to be seen.