60% of Irish online spending went to foreign retailers in 2017 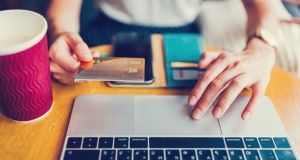 Retail sales on the whole, however, were “very strong in 2017” up by 7 per cent, a report has found. Photograph: iStock

Of the €5 billion spent by Irish consumers online last year, €3 billion went to online retailers abroad, a report has found.

The Consumer Market Monitor, published by the Marketing Institute of Ireland and UCD Michael Smurfit Graduate Business school, shows that 60 per cent of online spending in 2017 went out of the State.

Retail sales on the whole, however, were “very strong in 2017” up by 7 per cent for the year with sales of €40 billion, or levels seen prior to the recession. Although, consumers had been relatively cautious in the first half of the year, reflecting a decline in new car sales.

“The increasing number of people employed, as well as increases in hours worked, is leading to a substantial surge in the amount of disposable income in the economy,” the report said, noting consumer confidence picked up in 2017 having fallen the previous year.

Disposable incomes of Irish households rose by 5 per cent in the year to a total of €102 billion, higher than the previous peak of €101 million in 2007. Borrowing in the year showed a return to pre-recession conditions and household debt grew by 2 per cent in 2017, having fallen steadily since 2008.

Despite chronic housing supply, some 49,756 homes were sold in 2017, according to the report, which again represented the highest rate of sales since the recession. The report estimates 55,000 properties will be sold this year.

The Consumer Market Monitor indicated that the service sector recovered quicker than the retail sector and had recovered modestly from 2011 before slowing in 2017 to a rate of 2.3 per cent growth. Most sectors were in negative territory last year with the exception of scientific and technical services and accommodation.

The report’s author, Prof Mary Lambkin, said: “It is great to hear the cash registers ringing again for Irish retailers, and signs are positive for continued growth. The rapidly expanding labour market and rising incomes are two significant factors fuelling spending, however, a significant amount of retail spending is leaving the country.

“This is something that can be improved upon, but will require investment in websites and e-commerce platforms, as well as access to decent broadband infrastructure,” she said.