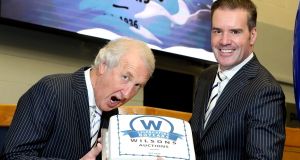 With programmes like Cash in The Attic and Property Wars now stalwarts of our TV schedules, auction houses have become a familiar feature for many people in recent years. It’s no longer a place you dare not enter for fear of scratching an itchy nose and coming home with a boat.

“It is lovely to see private people coming along and going home with a bargain,” says Peter Johnston, group operations manager for Wilsons Auction Group. “We do like the fun of the fair.”

The family-owned company was founded in 1936 by agricultural machinery salesman and butcher William Wilson in the Co Antrim town of Mallusk. His son Ian, who took over in 1976, still leads the business, which recently celebrated 80 years in existence.

It has grown substantially in recent years, not least with the help of a relationship with the Criminal Assets Bureau (CAB) and its UK counterparts.

Many of the changes have been started with Johnston, who joined the company 30 years ago as a school-leaver employed to park and wash cars.

“I’ve done pretty much every job in the place, from washing and parking cars right up through auctioneering, starting as a junior and working right up through the business. You know every angle of it then, and that really helps. You take no nonsense from people because you’ve done the job yourself, and you can assist people so much because you know every nook and cranny of it really.

“And that’s one of the reasons we like to see youth coming in through the business. We haven’t got a high staff turnover but we like to see that fresh set of eyes – school-leavers coming in.”

Back when he joined the group, Wilson’s had only a staff of 12 located in Mallusk just north of Belfast; today it employs 350 at 16 sites in Northern Ireland, the Republic, England, Scotland, Wales and, most recently, Spain.

It hosts more than 1,000 auctions annually, with a total of more than £200 million in goods going under the hammer each year.

“Our bread and butter is vehicles. We sell over 100,000 a year, and that’s probably what we are best known for. But around eight years ago I decided to go more into the government line with the [UK] Home Office, the Exchequer and the Criminal Assets Bureau.

“It’s really taken off because there was a definitive hole in the market. We sell for 40 police forces nationally now. They were going out and arresting the crooks, and they were doing their time but the actual assets, the confiscation orders, weren’t getting fulfilled because government agencies didn’t have a robust route to market.”

When Wilsons first proposed its services, the Home Office’s annual receipts for seizures was £200,000; now the auction house gives it back £2million per annum.

Last year Wilson’s opened an office in Puerto Banús in Spain to accommodate the auction of international property and luxury items that were proceeds of crime and held in Spain. The office is growing due to demand from estate agents looking for an alternative outlet so the expansion has proved advantageous.

Johnston explains. “The horse fraternity went crazy when they heard it was being sold. For us the beauty of it was that the horse never had to leave its stable. It didn’t know what was happening.

“We auctioned it in one of our prestige auctions alongside yachts, diamonds and fast cars etc. Utopia was just seen doing his stuff on the big screen behind me.”

Brexit has still to impact on the auction trade, but it could create difficulties for the movement of vehicles back to their country of origin for sale, such as left-hand drive cars.

“We’re hoping that relationships don’t break down. At the moment it seems to be business as usual. Any of the government agency relationships we have built up. they are still there and don’t appear to be going anywhere.

“There was a lot of fear factor with the announcement that people were going to baton down the hatches and were not going to spend etc, but we haven’t noticed any difference whatsoever.”