Davy Byrnes has been in the Doran family since 1942 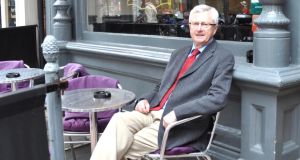 Redmond Doran:"With a family business, you are naturally more cautious because there are other people to think about."

Davy Byrnes pub is a Dublin landmark. It has been patronised by thirsty citizens and shoppers since 1889 and the mention of Leopold Bloom stopping off there for a Gorgonzola sandwich and glass of burgundy in James Joyce’s Ulysses has long made the pub a place of pilgrimage for literary-minded locals and tourists alike.

The Doran family has owned Davy Byrnes since 1942 when it was acquired for £10,000 by Michael Doran, father of brothers Redmond, Michel and Colclough who today run Davy Byrnes and the Old Stand in Exchequer Street between them.

At one time the family also owned the Queens in Dalkey, Dorans in Marlborough Street and two off-licences. However, the recession of the 1980s saw Dorans Café Bars consolidate its operations and concentrate on its two Dublin 2 pubs.

Company managing director Redmond Doran started working in the family business in 1963. He looks after Davy Byrnes while his brothers run the Old Stand. Fifty years after he first stood behind the bar, he is still very much a “hands on” manager who says that long established businesses that appear to run like clockwork only do so if they are actively managed on a daily basis.

“There is no magic bullet to being successful in a business like ours,” he says. “It is about doing the small things well over and over and over again. It is a fallacy to say a business runs itself. I think you have to be around. I rarely take more than a week’s holidays at a time because if there is a decision to be made, I want to be here to make it.”


Attitude of staff
Davy Byrnes has survived for more than 70 years with a Doran at the helm and Redmond agrees that the word “conservative” is an appropriate description of the brothers’ approach to running their business.

“I think if you were on your own, you would probably take more risks but, with a family business, you are naturally more cautious because there are other people to think about,” he says.

“For us, the emphasis has been on getting the important things behind the scenes right, such as overheads, purchasing and staffing, and keeping them right when the environment changes either for economic reasons or because of changes to the law. It’s very repetitive and not very exciting, but it creates consistency and ensures that the focus is on looking after our customers.

“One of the key aspects of the business is our staff and many of them have been with us for 20 years and more,” he adds. “They are the customers’ first contact with your business and their attitude and how they deal with people is of the utmost importance.”

While Davy Byrnes has all the appearance of a steady ship calmly negotiating the current choppy waters, Doran says it has been hit by the downturn. Turnover has fallen by 12 per cent since 2007 and employment is down to 40 from 50 at the height of the boom.

“We have definitely become more cost conscious. We haven’t replaced staff who have left and we have looked closely at our purchasing and how we might buy better,” Doran says. “Food has always been a big thing for us. It represents around 36 per cent of turnover in Davy Byrnes and I’d say we’ve trimmed about 10 per cent off costs by buying better.

“We have also become more pro-active in terms of driving better deals with the drinks companies. They will play ball now in a way they wouldn’t have during the good times.”

Doran says lessons learnt during the economic meltdown of the 1980s have also helped keep the business on track. “In the 1980s tax rates were high and interest rates even higher, and we learnt the importance of not allowing your business to become dependent on the banks,” he says.

It was obviously a lesson well learned, as the €250,000 development currently underway to extend the main bar by around 50 per cent has been financed from retained earning. The latest expansion will continue the pub’s distinctive art deco theme and replace the Arcade Bar, which has been closed and absorbed into an adjacent development.


Traditional pub
Although changes to the drink driving laws, the smoking ban and increased competition have presented Davy Byrnes with its share of challenges, Doran says that, in many ways, it has become easier to be a city centre publican.

“There have been a number of things that have transformed the area in a good way,” he says. “The paving of Grafton Street, the arrival of the Dart and the Luas, and the deregulation of the taxi industry have all helped bring more people and more life to the area.”

It’s still a very traditional pub where patrons do not have to compete with the sound of piped music or a blaring TV and Doran says there are no plans to change that well-tested formula.

“To some extent, we are not masters of our own destiny in that cities change and laws change and we have to work with them. But you try to do this while maintaining what is unique about Davy Byrnes,” he says.