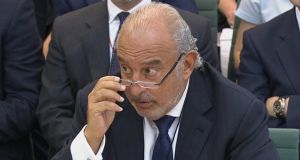 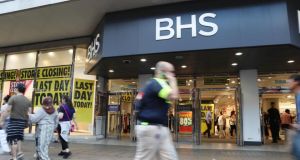 Britain’s pensions regulator said the deal with Philip Green will see him fund a scheme to give BHS pensioners higher benefits than they would get from the UK pension protection fund. Photograph: PA

Britain’s pensions regulator has agreed a cash settlement worth up to £363 million with Philip Green, the former owner of collapsed department store BHS, it said on Tuesday.

The regulator said the arrangement has the support of the trustees of the two BHS pension schemes.

It will see Mr Green provide funding for a new independent pension scheme to give pensioners the option of the same starting pension as they were originally promised by BHS, and higher benefits than they would get from the UK pension protection fund.

The yacht-owing billionaire had promised MPs last year that he would resolve the £571 million pension deficit at BHS.

“We will sort it,” he told the work and pensions committee during a six-hour evidence session in June. “We will find a solution.”

Billionaire Green owned BHS for 15 years before he sold the loss-making 180-store chain to Dominic Chappell, a serial bankrupt with no retail experience, for £1 in 2015.

BHS went into administration in April 2016 and the last of its stores closed in August. Some 11,000 jobs were lost. – (Reuters)