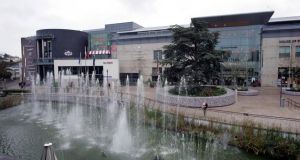 UK property group Hammerson could build residential units that it would then rent rather than sell on the six-acre development site that it co-owns at the old Dundrum village centre, the business’s Irish chief has said.

UK architectural practice FaulknerBrowns was appointed recently as the masterplan architect for phase two of the Dundrum estate and work on the scheme design has commenced.

Simon Betty, who heads Hammerson’s operations in Ireland, said the company would consult with local planners and other stakeholders before unveiling its plans for the site, probably in the second half of this year.

“Retail and food and beverage will naturally provide a lot of the ground and first floor uses but we see value and opportunity in the upper parts, whether that be hotel, offices or, perhaps most interestingly, residential,” Mr Betty told The Irish Times on a call to discuss its full-year results.

“It’s a little early to be definitive about the scale of residential development but we certainly see it as an attractive and viable opportunity for residential apartments, whether they be for sale or to let. But it’s too early to be specific about numbers.”

Mr Betty said the UK property group would take a few months to assess the potential opportunities. “During the second half of this year, we would have expected to clarify our thinking on that,” he said. “During the course of the next 18 to 24 months, we would hope to have achieved various planning milestones.”

The village centre is let to a number of retailers, including Lidl, Dealz and a post office. It generates rental income of about €1.4 million annually.

They see the estimated rental value of Dundrum Town Centre rising to €90 million by 2021, according to a presentation for analysts as it reported its full-year figures.

The centre had an estimated rental value of €65 million when Hammerson and Allianz took control of the property, and it grew by 9 per cent in the second half of 2016.

Hammerson also converted the loans connected with the Ilac shopping centre into an equity stake in December, leaving it as co-owner of the central Dublin centre with Irish Life. It expects to take ownership of a 50 per cent stake in the Pavilions centre in Swords by the end of June, having taken control of an adjoining development site last July.

Hammerson reported an 8.8 rise in rental income across the group to £346.5 million (€406.5 million) last year. In the Republic, where the group also owns a minority stake in the Kildare Village retail outlet centre, rental income totalled £14 million for last year.