Headcount to rise to nearly 3,700 people with new roles across a wide number of sectors 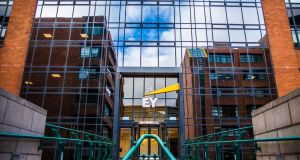 Consulting firm EY is to create 600 new jobs across its network of 10 Irish offices over the next year in a move that will bring total headcount locally to nearly 3,700 people.

The firm said it intends to hire 237 experienced professionals by the end of its current financial year in June, with a further 363 roles for graduates being created before next October.

EY Ireland provide assurance, tax, audit, transaction and advisory services to a wide range of clients, and in recent years has increasingly expanded into areas such as IT forensics.

Some 333 of the new roles will be based across the firm’s two Dublin offices with a further 136 in Belfast. The rest of the jobs are spread across Cork, Galway, Limerick and Waterford.

The firm said it was recruiting widely, with roles in traditional business lines such as tax and accountancy, business advisory and corporate finance, as well as new jobs in more cutting-edge areas such as data analytics and digital strategy.

The jobs announcement comes 15 months after EY announced plans to take on an additional 520 people, with the firm finishing 2018 having filled 536 roles.

“Our brand is very attractive to high-performing people because they can progress and be promoted within our firm. We promoted over 750 people in EY last year and the great thing is there was a 50/50 split in that gender wise,” he added.

EY, which is due to publish its annual results in November, recorded fee income of €316 million in the Republic for the year to the end of June 2018, up 28 per cent on the previous year. This marked the fifth consecutive year of double-digit growth with EY reporting strong performances across all of its service lines.

“We’ve had market-leading growth among our competition on the island of Ireland over the last five years, during which we’ve really been building out our traditional services and in helping to support clients in new areas,” said Mr O’Keeffe.

“There is an awful lot of change going on at a macro level but that is the right time for a professional services firm to invest because we’re here to think through the strategic issues that face and help them find the better solutions,” he added.