Profits on the rise by 27% at Lufthansa Technik Airmotive 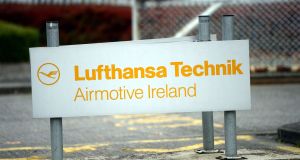 Pretax profits at the Irish Lufthansa group of companies last year increased by 27 per cent to $65.64 million (€59.83 million) after a surge in revenues.

New group accounts filed by Lufthansa Technik Airmotive Ireland Holdings Ltd show that the business enjoyed the jump in profits after revenues increased by 12.6 per cent from $192.8 million to $217 million.

Numbers employed at the business in the 12 months to the end of December last increased from 675 to 701.

The directors state that the aircraft overhaul business returned to growth in 2018 with a 15 per cent increase in revenues despite a delay with its planned entry into the Dreamliner B787 aircraft market until 2019.

The directors state that the completion of a series of connectivity modifications on the entire Boeing 777 fleet of a national career contributed largely to the increase in revenues. The overhaul business opened a technical training campus last year “to support planned additional trainee classes given the current and expected future business volumes”.

The directors also said that engine component repairs reported strong turnover growth of 17 per cent in 2018.

Revenues at the business’s aircraft leasing segment increased by 6 per cent “and continued to generate strong profits”.

The business invested $74 million in new aircraft leasing assets during the year and further expanded its new aircraft and engine technologies in that portfolio.

The group’s profits were also boosted last year by the business recording a gain of $2.89 million on the sale of an investment and a gain of $852,000 from the sale of a fixed asset.

At the end of December last, the group was sitting on shareholder funds of $509 million that included accumulated profits of $337 million.

Staff costs at the business last year increased from $41.3 million while directors’ pay dipped marginally from $1 million to $985,000.