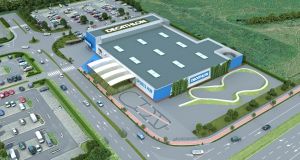 An impression what the Decathlon outlet in Ballymun could look like

French sports retailing giant Decathlon plans to open nine shops in Ireland over the next few years, beginning with a large outlet beside Ikea in Ballymun, north Dublin, where it has secured planning permission and will begin construction shortly.

The retailer outlined its plan to bring more than 60 of its sports brands directly to Irish customers, and its Ballymun outlet will feature a rollerblading track, bike circuit and astroturf pitch.

Known as the “Ikea of sports” for its large, warehouse-style outlets and enormous range of keenly priced sporting goods, Decathlon will, appropriately enough, open its first store adjacent to the Swedish big-box retailer in Ballymun.

Decathlon acquired the 17,000sq m site, which has been used as an overflow car park for Ikea, for €4.3 million from Dublin City Council last September, and planning approval finally came through before Christmas.

Bastien Grandgeorge, chief executive of Decathlon in Ireland, said a tender with a construction firm would be signed shortly, with work to commence soon after. Recruitment for about 90 positions at the store is expected to commence in June.

“One dream is to open before Christmas,” Mr Grandgeorge said, but conceded that it most likely won’t be open until early 2020.

Mr Grandgeorge said it was close to signing a deal for a second Dublin outlet, either to the west or the south of the city.

This will be followed by a third store in the capital, before it shifts its focus to Cork and Galway by late 2020/early 2021, with the aim of ultimately having nine outlets in Ireland.

“As soon as we validate the business model in the first store, we can open three or four stores a year,” Mr Grandgeorge said.

The Ballymun store will be a “sports hub”, with 4,000sq m of retail space initially and a further 1,000sq m to follow, and will have a large external sports area, including a playground, fitness machines, a football pitch, rollerblading area, bike circuit and space for the store to partner with other sports providers to offer classes in yoga or zumba.

It will all be free to access, and there will also be an area to clean and mend bikes, with tools provided. Bike maintenance will also be a big part of its offering, with a workshop on site for repairs.

“This will be unique in Ireland, and also in the UK,” says Mr Grandgeorge. “We aim to make the benefit of sports accessible to all in Ireland.”

The Dublin store will be bigger than the average Decathlon outlet, which is about 3,000sq m, and the Irish hub will have space to display 62-70 sports brands on its shelves, including some of the more popular lines, including Kalenji, Kipsta and Quechua.

Decathlon moved into the Irish market in November 2017, when it launched a dedicated ecommerce platform here. Mr Grandgeorge said Ballymun was a “very good place” to locate its first store, being “symbolically important for us to invest for the very long term in Ballymun because we want to participate in the development of the area”.