Cork-based firm to expand operation with creation of 350 jobs 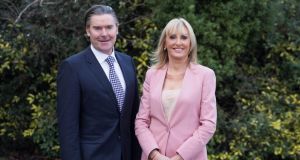 The company, which was established 15 years ago by husband and wife team Dan and Linda Kiely with just six staff members, is now a leading exporter of business process outsourcing, operating in 12 languages.

Three hundred and fifty jobs have been announced at the business outsourcing company Voxpro in Cork today, expanding its workforce from 500 to 850 people.

The company, which was established 15 years ago by husband and wife team Dan and Linda Kiely with just six staff members, is now a leading exporter of business process outsourcing, operating in 12 languages.

Voxpro acts as a third party provider of a range of business services including customer service and tech support between international companies, primarily liaising between firms in Europe and North America.

Accordingly the new positions, which were announced alongside Taoiseach Enda Kenny and the Minister for Jobs Richard Bruton this morning, will focus on multi-lingual technical skills.

Mr Kiely said the move represented a further “rapid expansion” of his company which services over 100 indigenous and global organisations.

“[THIS] puts us on track to over-deliver on our commitment to employ 1,000 people internationally by the end of 2015,” he said.

“As our business expands we have a very clear focus on attracting international business partners and these new highly skilled, technical roles will support our endeavours to secure global clients and become their growth partner in Europe.”

The award-winning outfit is based in three purpose built facilities in Cork and has a recently opened office in Dublin as well as an international base in San Francisco.

Welcoming the announcement, Mr Kenny said the company was “a real Irish success story and a great inspiration for those setting up businesses today”.

“For our part the Government has made it a priority to support local business to create local jobs,” he said.

Mr Bruton said a number of initiatives had been put in place to support a “powerful engine of Irish industry” at the core of the job strategy.

“Voxpro, an Irish company which is winning business from some of the world’s leading multinationals and using that to expand rapidly in export markets and creating jobs is a great example of what we are trying to support,” he said.