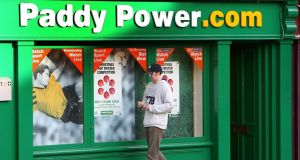 Paddy Power: news of the proposed merger with Betfair, first announced in August, wasn’t all that surprising, given the consolidations that have been going on in the gambling industry. Photograph: Julien Behal/PA Wire

This week it was taken very seriously though, as its proposed €8 billion merger with Betfair was approved by the UK Competition and Markets Authority.

The combined company is set to supersede William Hill, currently number one in the UK and Irish betting industry.

However, the news of the proposed merger, first announced in August, wasn’t all that surprising, given the consolidations that have been going on in the gambling industry.

Though it might have been a little surprising to Paddy Power’s social media team, which had taken to Twitter a month earlier to joke that hot on the heels of the Ladbrokes/Coral merger, it would be merging with rival Betfair to create a company called Betty Power.

That said, bookmakers are supposed to be prescient.

Paddy Power’s humour seems to have rubbed off on Betfair of late. Betfair Poker recently tweeted that a merger is more than just shares or money, there’s also this potion made from tree bark that you have to drink to fuse your souls together.

There seem to be few downsides to the merger, from a business point of view anyway. Paddy Power, with its laddish humour and whacky stunts, appeals to recreational customers. Its own website even has a section dedicated to making mischief, which contains “betting news and banter, served with a side of mischief”.

Betfair, having been a key pioneer of exchange betting, which involves customers betting against each other, appeals to more sophisticated customers. Thus the combined entity should appeal to broad spectrum of online customers.

The boards of each company believe the new entity will be able to achieve recurring annual pre-tax synergies of around £50 million.

It’s a time of unprecedented consolidation in the gaming sector. Ladbrokes and Gala Coral are merging, GVC is taking over Bwin.party, and now Paddy Power and Betfair are joining forces. It seems only William Hill is absent from the party. It’s probably only a matter of time though before it does.