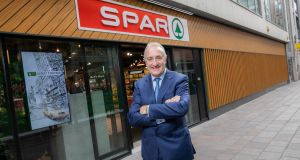 The BWG retail group has launched a new strategy for its Spar and Eurospar brands, comprising store refurbishments, more in-store dining, a shift to digital sales techniques and a €25 million expansion of its network.

The new strategy was announced to BWG’s Spar franchisees on Monday at its annual conference in Killarney by group chief executive Leo Crawford. In his address to the meeting, he claimed the initiatives would be a “game changer” that would help to “transform” the convenience retail sector.

The strategy for Spar and the larger-format Eurospar is two-pronged: operational changes to the existing 450-strong Irish Spar/Eurospar network, and the opening of 45 new stores.

Speaking to The Irish Times, Mr Crawford said the 45 new stores would comprise a mixture of “greenfield” brand new outlets and the recruitment of existing independent stores to its network. He said BWG would be prepared to co-invest with retailers on some greenfield developments.

About five of the new stores will be under the Eurospar banner, with the rest Spar outlets. BWG estimates it will take about two years to open the new shops.

Mr Crawford said about 60 per cent of the new stores would be in high-footfall urban locations. It is especially interested in new stores near transport hubs.

The proposed changes to the existing Spar/Eurospar network are primarily based around expanding the amount of foodservice outlets in its stores, and rolling out a range of technology initiatives such as digital shelf labels and in-store advertising projectors.

Many of the new initiatives that will be rolled out have been trialled in the recently-revamped Spar outlet at Millennium Walkway in Dublin city centre, near the Jervis Street shopping centre.

In the US they call it the grocerant (a hybrid of grocery and restaurant). It started with in-store coffee and now it has spread to meals. I suppose we’re entering that blurred area between the retailing and restaurant sectors

The store’s deli section has been expanded and it has also reopened with the addition of several new in-store dining concessions. These include new brands created by BWG, such as Pitta Project and I-Scream, the group’s ice-cream proposition.

“Foodservice is a new area of growth. Looking at international trends, that’s where the opportunity lies. We’re aiming to sell food for either consumption onsite, or within an hour or two of leaving the store,” Mr Crawford said.

“In the US they call it the grocerant (a hybrid of grocery and restaurant). It started with in-store coffee and now it has spread to meals. I suppose we’re entering that blurred area between the retailing and restaurant sectors.”

BWG is also understood to be working on technology initiatives such as cashless self-service retailing, which is being trialled at a Dublin location.

This would mean that a customer could potentially walk into a store and pick up, for example, a bottle of juice, scan it with their mobile phone for payment, and walk out the door again without ever interacting with a member of staff.

Mr Crawford said many of the digital initiatives being trialled in Ireland may eventually be rolled out abroad by Spar International, the Dutch owner of the brand globally.