Supermarkets urge suppliers to ‘map’ sources to prepare for Brexit 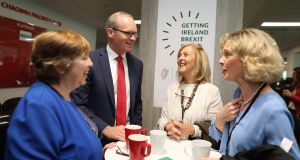 Large supermarket chains have asked suppliers to conduct “mapping” exercises to track where their products originate as part of planning for Brexit to make sure supplies are not interrupted.

Details of how businesses were planning for the UK’s departure from the EU were discussed at the Government’s first “Getting Ireland Brexit Ready” public conference in Cork yesterday.

Jonathan McMillan, manager of Enterprise Ireland’s Brexit unit, told an audience of business owners and managers that, in the absence of political decisions on Brexit, retailers such as Musgraves, Aldi and Lidl had asked suppliers to map out where they were sourcing their products in preparation for whatever form Brexit took.

The conference is the first of four public conferences hosted by the Tánaiste and Minister for Foreign Affairs, Simon Coveney, as the Government steps up plans to encourage companies to prepare for the UK leaving the EU next March, even as political negotiations on a Brexit deal stalled.

Mr McMillan said many Enterprise Ireland clients had said it was “too early” to plan for Brexit without knowing what deal the politicians were going to agree but had been forced to act by their customers who had asked them to show how they were preparing.

“Suddenly, our SMEs [small and medium-sized enterprises] are starting to have this reality check in terms of this actually happening and our customers are having concerns about it,” he said. The requests come from across a range of sectors, not just in retail.

Mr Coveney, the Minister leading the State’s Brexit plans, said the Government wanted to ensure businesses had their own “backstop mechanisms” in place to respond to Brexit “just like the State has to”.

“Even if we get a really good deal on Brexit, which I hope we will, that is still going to involve some change. It is still not going to be as good as what we have today,” he told The Irish Times.

The conference heard from businesses as diverse as embroidery and clothing company Academy Crests, cheesemaker Dairygold and Hook Lighthouse and Heritage Centre. All have diversified into new markets beyond the UK to protect themselves from lost business as a result of Brexit.

“Being Brexit ready is as best as you can do to cover yourself,” said Phil Cone of Academy Crests.