Boots to cut administrative staff by 10%

Move is part of cost-cutting strategy initiated by US owner 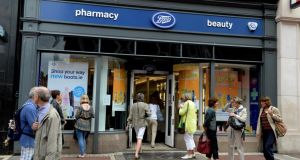 The British division of Walgreens Boots Alliance will cut 700 non-store support positions through a combination of job cuts, assignments to other departments and not replacing people who leave or retire, the pharmacy operator said in a statement on Monday.

Chemist chain Boots is to cut it s administrative workforce by 10 per cent.

This is part of the UK company’s contribution to a $1.5 billion cost-cutting programme initiated by its US-based owners.

The British division of Walgreens Boots Alliance will cut 700 non-store support positions through a combination of job cuts, assignments to other departments and not replacing people who leave or retire, the pharmacy operator said in a statement on Monday.

About 400 of the jobs will be culled at the division’s head office in Nottingham. “While we have continued to deliver a solid performance in recent years, we cannot be complacent,” Boots president Simon Roberts said in the statement.

“This plan will make Boots even better for our customers and drive sustainable future growth.”

Walgreens has already frozen pay for senior executives and set about closing 200 US drugstores as part of its $1.5 billion spending-reduction program. Walgreens, the biggest US pharmacy chain, is under pressure from investors because of a pension-fund lawsuit claiming the retailer overstated the benefits of the $15.3 billion deal that brought it full ownership of European counterpart Boots Alliance last year.