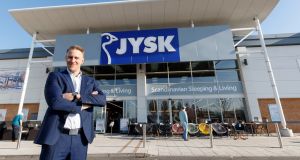 Danish retail brand Jysk is to open three more stores in Ireland in the coming months, creating up to 50 jobs.

The new stores will open in Drogheda and Navan in July, and Portlaoise in August.

It follows the opening of the home retail company’s first Irish store in Naas, Co Kildare, in April and is part of the company’s plans to open 15 stores in Ireland over the next two years.

Recruitment for the new stores has already begun, with positions for deputy store manager and sales assistants across the three stores.

When we made the decision to bring our brand to Ireland, we knew that we wanted to expand quickly across the country and develop a robust employment strategy,” said Jysk Ireland’s head of retail Roni Tuominen.

As part of its expansion plan, Jysk has opened a head office in Dublin and plans to grow the team in the coming two years to include sales, marketing, human resources and finance roles.

“Jysk has stores in 51 countries and employs 23,000 people across the world.