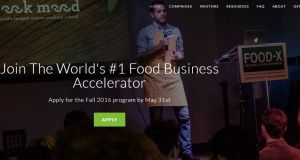 Food-X, which currently runs twice yearly in New York, partners with early-stage food entrepreneurs to help them bring their products and services to market.

SOSV, a $250 million venture capital fund founded by Cork-based entrepreneur Sean O’Sullivan, is looking to establish a European version of Food-X, the first international business accelerator programme for start-ups in the food and drink industry in Ireland.

Food-X, which currently runs twice yearly in New York, partners with early-stage food entrepreneurs to help them bring their products and services to market. Named as one of “the world’s top 10 most innovative companies of 2015 in food” by Fast Company magazine, it typically provides up to $50,000 in funding in return for an 8 per cent equity stake in individual companies.

Plans to establish a European version of Food-X early next year in Cork are progressing with the group looking to avail of support from Enterprise Ireland, which recently put out a call for expressions of interest in a new €3 million regional accelerator development scheme.

SOSV, formerly SOS Ventures, was established by former Dragon’s Den star and MapInfo co-founder O’Sullivan in 1993. It has funded over 300 starts-up since it was set up and is currently funding over 120 firms a year through its accelerators, which include IndieBio, a synthetic biology-focused programme which runs in both Cork and San Francisco.

Bill Liao, IndieBio founder and European venture partner for SOSV, who lives in Cork, told The Irish Times that the success of IndieBio in Ireland and the country’s reputation as as a premium food producer were among the reasons why SOSV wanted to establish Food-X here.

Under the IndioBio accelerator, companies receive seed funding, access to laboratory space at University College Cork and valuable guidance from a team of established entrepreneurs, including Mr O’Sullivan and Mr Liao, who also co-founded CoderDojo. Among the start-ups to have take part in the accelerator are Muufri, which made headlines around the world when it revealed it was developing a synthetic cow-free milk product that is expected to hit shelves within the next two years.

“We already have IndieBio running here every year and living in Cork has shown me how amazing food production is here. We have a successful food accelerator programme running in New York and with Enterprise Ireland putting out a call to do regional accelerators, it feels like a perfect alignment,” Mr Liao said.

“We’ve had several food-related companies that have come through IndieBio in Cork including Muufri, Cultured Beans and Afineur and I think the confluence of tech and food in the region can be very powerful and I’m super keen to do it,” he added.

Mr Liao stressed that the success of Food-X in Ireland was dependent on whether it could get Enterprise Ireland support and whether it could build a community that would support the programme. He said it was hoped that as many Irish start-ups as international ones would end up participating in a Cork-based version of Food-X.

“The system we have developed for Food-X is working perfectly and there have been some amazing companies that have been through it, including my favourite which is a start-up that makes crates that you just add water to and which cools produce down without the need for refrigeration,” he said.

Mr Liao said France and Italy are also on the list as potential bases for a European Food-X but stressed that Ireland was a front-runner. Nonetheless, he also voiced concern over increased industrialisation of food produce by some of the country’s biggest players since the end of the milk quota.

“Industrialisation is a huge risk and its a big mistake. Go to a feed lot and you don’t see fat, happy cows on green grass, you see misery. I don’t think people want to buy food that comes from that. It is important to retain innovation and expand on that rather than go for a cheap buck,” he said.