Tax return for 2016: The deadline is looming large 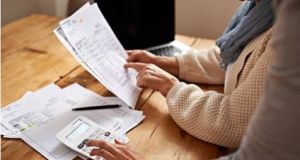 The self-assessed tax deadline is inching ever closer, which means that if you haven’t already taken this matter in hand, it’s time to do so. File photograph: Getty Images

While many of us are still thinking about how our tax situation will change come January 1st next following last week’s budget, others have more pressing matters in mind: Filing their 2016 tax returns.

Yes – the self-assessed tax deadline is inching ever closer, which means that if you haven’t already taken this matter in hand, it’s time to do so.

In short, more people than ever before must now file a tax return of some description. If you have earnings outside of the PAYE system, you will need to file either a Form 11, which is the longer, full version for self-assessed people, or a Form 12, which is for people whose main form of income is through the PAYE system, but may have additional earnings below a certain threshold.

Previously, the threshold for non-PAYE income that required a filing stood at €3,174 but, with the Finance Act 2015, the Government moved to take more people out of the Form 11 net by increasing the threshold to €5,000.

It means that if you have additional earnings such as interest on bank deposits, consultancy work, rental income, share dividends, a foreign pension or trading income from a source such as Airbnb, and it is below this limit, you can declare this income and pay tax owed on it by filing a Form 12.

This helps in two ways;

2) it’s also cheaper, as you won’t have to pay PRSI at a rate of 4 per cent on these earnings.

In addition, Form 12 offers broader payment options. If you can’t pay off the amount owing in full, the Revenue can lower your tax credits for subsequent years to get their money.

There is a catch however; taxpayers who have previously filed under Form 11 will have to continue doing so – even if they earn less than €5,000 in non-PAYE income.

When is the deadline again?

If you file your tax return by post, then you’ll need to get moving – and fast – as time is slipping away. The deadline for paper returns – for both Form 11 and Form 12 – is October 31st, but you’ll have a bit longer if you file electronically.

This year the deadline for the Revenue’s ROS system is November 14th. And remember, this means you need to settle your 2016 tax bill by this date, as well as making a preliminary payment for your 2017 taxes.

You’ll also have to settle your preliminary tax bill for 2017 by this date for Form 11 filers. While filers have a number of options in terms of how they calculate this, opting to pay 90 per cent of tax owed for 2017 can be risky, as if your fortunes change between now and the end of the year and you’ve underpaid tax owed, the Revenue is entitled to charge you interest on the differential.

As such, David O’Reilly, managing director of Fenero, recommends basing the payment on 2016 figures.

“There is no possibility of a potential interest charge,” he says.

This year the Form 11 has changed in a number of ways. “Probably the main change for 2016 is that pay and tax details for individuals registered for income tax are not visible on ROS, but they are pre-populated on the return,” says Barry Flanagan, a senior tax manager with taxback.com.

Another change is in relation to income earned from employments. The Revenue now wants you to specify from which jobs you have earned income, rather than just offering a cumulative figure.

Are there any changes if I’m self-employed?

Those who work for themselves will experience one boon in this year’s tax returns: the introduction of the earned income credit, which will kick in on earnings over €8,250.

Remember though, that the credit doesn’t apply to either investment or rental income, and you are not allowed to claim both the PAYE tax credit and the earned income credit if you earn money under both regimes. The maximum credit you can claim across both sources of income is €1,650.

The rate on Universal Social Charge (USC) also fell during 2016, so the self-employed can expect a further (slight) decrease in their 2016 tax bills. The ceiling also rose, to €13,000 from €12,012 previously, which may remove some of those filing from the net.

If you’re a landlord, you can expect some significant changes in your tax return this year. In an effort to keep a closer eye on just what landlords are declaring their profitability to be – and on what properties – the Revenue will, for the first time, collect information on the amount of residential rental income landlords declare.

Previously, tax returns did not require rental income to be returned in a way that would enable residential property letting income to be separately identified from rental income from other types of property, such as commercial property. Now, however, in response to “policy interest in the rental market”, the Revenue is looking for a breakdown on commercial vs residential.

As Flanagan notes, this will serve a number of purposes, including getting a clearer picture of how profitable property investment can be – and where.

“The intention behind it is to build up a picture for Revenue to see which sectors are the most profitable,” he says, adding, “it could feed into government strategy and help with planning”.

While the Revenue is not yet looking for a breakdown on individual properties – or where they are located – it may in time do so.

One point to note, says O’Reilly, is that, if you have residential income you’ll find it automatically pre-populated into the commercial box this year, so you will need to move this.

While it’s still unclear what planning arrangements will be needed to rent accommodation on Airbnb, it is now very certain that any income earned from the site must be declared and tax paid upon it. Previously, there had been some confusion as to whether or not Airbnb income would qualify for the rent-a-room scheme, but this has since been clarified.

Not only that, but an agreement between the travel website and Revenue means the tax authority can see any income you might be making.

“People should be clear on it by now, any income that they have is already being reported to revenue by Airbnb itself,” says Flannery, adding, “Individuals really need to be aware that there is nowhere to hide.”

Indeed, some people earning an income from the platform will already have received letters from Revenue asking them to make sure their affairs are tax compliant.

“How they word the letter is quite clever,” says O’Reilly. “They say ‘We know something, so tell us everything’.”

Such a letter can entice someone who hasn’t declared several sources of income to do so – after all, the letter isn’t clear what the Revenue’s source is.

Remember also that thanks to a change in last year’s budget, the amount of mortgage interest allowable as a tax-deductible item has increased, up from 75 per cent to 80 per cent.

However, as the initial increase only came in earlier this year, landlords will have to wait until next year’s returns to avail of the deduction, although it might make preliminary tax for 2017 that little bit cheaper.

1 Three Ireland switches on 5G network around the country
2 Pilita Clark: The looming legal minefield of working from home
3 New car prices could rise by up to €10,000 if taxes increase in budget
4 State should use Covid-19 impact on building costs to build homes
5 Former junior finance minister to head funds sector lobby group
6 Dublin-based ID-Pal raises €1m in funding as it looks to expand
7 State ‘should bail out’ troubled homeowners with mortgage assistance payment
8 Visitors to Ireland increased almost 60% last month
9 More financial firms setting up or expanding in Ireland despite Covid-19
10 Chris Johns: Boohoo exposed on pay and conditions in digital economy
Real news has value SUBSCRIBE
Save money on international transfers