Will election mean delay in planned changes to State pension? 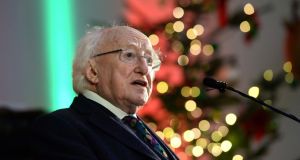 President Michael D. Higgins: in general, legislation really doesn’t get through the Dáil and Seanad any quicker than two and a half months before being presented for the President’s signature. Photograph: Dara Mac Dónaill

I am due to retire when I reach 66 in August 2020. I have been told that if the new changes regarding the pension scheme are introduced next May, I will get a reduced pension of approx €210 per week.

If, however, the changes are not implemented before the August date, then I will get a pension of approx €243 per week.

Given that an election is in the air, what are your thoughts on whether the new pension bill will pass before my retirement day comes around.

I wouldn’t spend the €33 extra a week just yet but, if I were a betting man, I’d be tempted to place a small wager that your higher pension is at decent odds.

The big issue is how fast Government can process legislation.

We’ve all seen in the past those rare occasions when an issue is considered to be so urgent that government can turn emergency legislation around in a matter of days. However, such occasions are few and far between.

On the more ordinary legislative calendar, the quickest example of legislation being passed is the Finance and Social Welfare bills that are passed each year following the budget. Under EU rules, the legislation enacting the budget must be passed and signed by the President by year end – even though many of the measures will not kick in for months after that date.

So, it is now normal for an early October budget to be framed in law by year end – President Higgins signed one such act on Christmas day one year.

That’s two and a half months and, in general, legislation really doesn’t get through the Dáil and Seanad any quicker than that.

The move towards a total contributions approach on the State pension has been in the works for well over a year but, as I understand it, the issue has yet even to get to cabinet. It seems to have been leap-frogged by another important piece of pensions legislation – plans to auto-enrol workers in pensions.

At the same time, the clock is ticking for this Government. The Taoiseach has already committed to a May election and he is coming under increasing pressure inside and outside his own party to consider an earlier date – possibly as early as February – not least to have a new government in place when the all-important negotiations on the shape of any British trade accord with the European Union post-Brexit kick off.

If the Government lasts until May, there is enough time to pass the necessary legislation on reform for the State pension but it is not the only piece of legislation in the queue and, as I said, it has not been considered urgent enough – or ready enough – even to put before Cabinet which is the first step.

Even then, the parliamentary draftspeople would need to work on it, it would probably need the eyes of the attorney general and then it actually has to get space in the parliamentary calendar for debate, including at committee, before being presented for the President’s signature to become law – assuming no hiccups in the process.

If the Government goes to the polls in February, the timeline is impossibly tight. And, in any case, a government heading for the polls tends to step back from anything other than legislative change that is likely to be universally popular.

Of course, there could be time after a February – or even May – election to pass the reforms into law before your pension kicks in.

It would be more likely if the current government were re-elected as it is their policy but, even then, it would need to move up the legislative priority order. If Fine Gael lost power, history tells us that any new government would want time to look again at the measure, and possibly tinker with it, before proceeding.

The team behind the Minister for Employment Affairs and Social Protection, Regina Doherty, does put together the annual social welfare bill, so it is quite capable of turning legislation around quickly when it needs to. I just don’t see any sign of that happening with the State pension reforms.

Best guess? If the current government returns, the legislation is passed later in the year with a January 2021 start date. A different government would likely see the date pushed out even further.

That would leave you safe on your higher pension as I cannot see a situation where the new rules would apply retrospectively except to people who would benefit under the new method of calculation – as the Department has already done in assessing post-2012 retirees under the proposed new rules.

A difference of €33 a week is not to be sniffed at. It amounts to over €1,700 a year. For you the new rules would mean an effective loss of over 13 per cent of your pension. My guess is that won’t happen but it is just that, a guess.