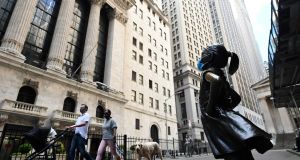 The masked bronze sculpture of the Fearless Girl by Kristen Visbal, in front of the NYSE on May 15th. Photograph: Johannes Eisele/AFP via Getty

After bottoming in mid-March, the S&P 500 advanced more than 30 per cent in the 40 trading days that followed – the second-best 40-day performance in the index’s history, according to Strategas Research.

That may sound unsustainable, but Strategas’s data indicates that it actually augurs very well for future returns. The firm examined the 10 best 40-day advances in history and found that over the following three-, six- and 12-month periods, stocks were higher on all but one occasion.

Returns were well above average on all three time horizons; stocks averaged gains of 16.3 per cent over the following 12 months, almost twice as high as historical norms. Many of the previous instances, for example, March 2009, December 1998, October 1982, represented major market bottoms. Further gains are not likely to be straightforward. According to LPL Research’s Ryan Detrick, stocks tend to correct about 10 per cent following the initial surge off of bear market lows. Nevertheless, any weakness tends to be fleeting.

Fund managers may see recent strength as little more than a bear market rally, but history indicates a more lasting advance may be on the cards.