Was bank wrong to force fixed mortgage on me before tracker rate? 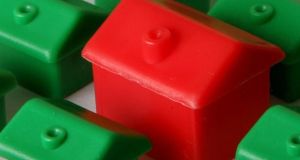 ‘Given the experience of 46,000 home owners whose lenders wrongly weasled their way out of tracker rates they had promised, it appears your lender acted with uncommon honour for the industry at that time.’ Photograph: Gareth Fuller/PA Wire

The tracker mortgage scandal just seems to run and run. Last July, the Central Bank issued what it said it expected to be its final report on the issue. Yet only last week, AIB was forced to admit that its exposure to the scandal was likely to double after it lost a battle with the ombudsman over whether a group of customers was entitled to a tracker rate.

There are about 5,900 customers in this group – adding about 15 per cent to the overall number affected – and it looks as though AIB is going to have to pay about €40,000 a head for its failure to honour an earlier commitment to offer them a tracker mortgage rate. The bank had sought to get away with a token payment of about €1,600 per case.

So it is certainly not too late to raise concerns over rates you were and were not offered as a customer.

The first thing is to check your mortgage documents and agreement. What does it say and what options does it offer you?

If it says that you are entitled to a tracker rate after coming off a fixed-rate period, then, as per last week’s ruling, you have a right to a tracker option. If the bank failed to deliver on that option when the fixed-rate ended, you have a case. If, on the other hand, you are relying on the sales patter of the bank’s mortgage team or a broker when they first sold you the product, you are going to find it impossible to make a case.

However, after a to and fro, I gather your issue is not that you were denied a tracker but that you were told you would not get one unless you first spent five years on a fixed rate. You are wondering whether this was legal?

There are a couple of things here. It appears that the bank did honour its commitment to put you on a tracker rate. That would have been in 2012, years after all banks had withdrawn trackers.

Given the experience of 46,000 home owners whose lenders wrongly weaselled their way out of tracker rates they had promised, it appears your lender acted with uncommon honour for the industry at that time. Of course, to some degree, that depends on the rate you were offered. I am assuming it was still competitive compared to the prevailing variable rates.

As to whether they could compel you to first go on to a fixed rate for five years, I cannot see how that is actionable even if you would understandably have preferred to go straight on to a tracker rate. The bank was up-front and gave you an offer which you could have refused but chose to accept – and it delivered on what it said it would do.

It would have been a lot cheaper for the banks – both in terms of cash and reputation – if they had behaved similarly with those 46,000 other customers.