It might seem premature, but starting early with a decent compound rate can really pay off 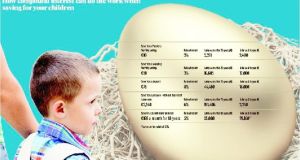 Yes, it may seem a crazy idea at first, particularly given the parlous state of so many of our own retirement funds. However, starting a pension for your child – or your grandchild, niece or nephew, or family fund – is not as bizarre as it first appears, and may actually be the greatest (financial) legacy you could bequeath your offspring.

It certainly seems that a growing number of people in the UK think so, with around 60,000 under 18s already having pension plans in place, according to HM Revenue & Customs.

The key reason for the growth in popularity of pensions for children is two-fold: when saving over the very long-term, compound interest can have a dramatic impact on a pension fund; and secondly, tax relief can help this money grow even more substantially.

When you consider that funding the State pension will be a major issue for governments and individuals alike in the years ahead, it’s worth bearing in mind that saving a little today can pay off in a major way tomorrow.

Introduced in 2001, stakeholder pensions allow anyone – be it a parent, an aunt or uncle, a grandparent, a family friend – to start a pension on behalf of someone else.

The key to the product is that even if you’re not earning, someone else can benefit from tax relief on contributions to your pension.

Stakeholder pensions are flexible, which means that you can stop paying in if needs be, or increase or decrease your contributions, and once the child reaches 18, you’ll hand over ownership of the pension to them and it will be up to them to make decisions on how it’s managed, and whether or not to keep making contributions.

The funds are locked away until the beneficiary turns 55 (or 10 years before retirement, which may be later than 55), and the proceeds can be transferred to another UK Registered Pension Scheme or to a Qualifying Recognised Overseas Pension Scheme at any time.

Parents may rightly balk at first when asked to consider saving for their offsprings’ retirement.

After years of paying out for their children’s education, hobbies and holidays, parents are now likely to have to help their children out with a deposit for their first home, thanks to the recent changes in mortgage lending.

But it’s difficult to get away from the fact that it makes good financial sense and doesn’t cost very much.

Indeed when saving over the long-term, the magic of compound interest can turn small contributions into a significant lump-sum.

Another example is putting away child benefit of €135 a month over 18 years. By the time your child has reached adulthood, you’ll have saved a sum of more than €47,000 if you can get a return of 5 per cent a year.

Of course when saving for a pension, the other major advantage you have is tax relief. In the example of the UK, tax relief on pension contributions is available at a rate of 20 per cent, which can boost your returns by an even greater amount.

So, the net effect of saving €135 every month is that total contribution comes to €169 a month, thanks to tax relief at 20 per cent.

So, by the time somebody reaches 55 they could have a pension fund worth about €55,000 – even if they choose not to pay anything into it once contributions from the funder stops at the age of 18.

At present, it’s not possible to establish a pension product such as a stakeholder pension for a child in Ireland.

According to the Revenue Commissioners, “an individual cannot establish a pension for a child whereby he or she can benefit from tax relief on the contributions to both the child’s pension product and the individual’s own pension product”.

But for the reasons outlined above, it may be an issue that the Government should consider, particularly when faced with the challenge of providing the State pension.

While it is not yet possible to create a pension for a child in Ireland, the central tenet of such products is still applicable in an Irish context – ie saving over the long-term and benefiting from compound interest can make a lot out of a little – albeit without the extra help tax relief offers.

So if your children are still small and you want to build up a nest-egg to help them out with major life-events in the future, such as saving for a deposit on a house or a wedding, or financing further education, it really does pay to start saving today. And saying you can’t afford it doesn’t really stand up when you consider that as little as €10 a month could make a substantial difference in 20 years’ time.

Boost this return to 8 per cent, perhaps by investing in the stock market, and the lump-sum will jump dramatically to €29,653 – and the total cost to you will again be just €12,000.

Or how giving your child a headstart with their pension, even if you can’t at present avail of tax relief on it. If you save their child benefit of €135 a month for just two years, ie at a cost to you of €3,240, after 70 years they will be able to access a lump-sum worth €50,452, based on a return of 4 per cent. If you managed to achieve a return of 6 per cent, the fund would be substantially greater, at €191,406. Put simply, the greater the return you can achieve, the greater the rewards will be.

However, as financial adviser Vincent Digby of Impartial notes says, it’s easier said than done given today’s low interest rate environment which is likely to continue. “One hundred euro growing at 5 per cent per annum compounded is worth €162.89 after 10 years. Reduce the interest rate to 1 per cent and the €100 only grows to €110.46 over the same 10 years,” he notes.

Another consideration to bear in mind is that the aforementioned figures are gross, so will be reduced when capital acquisitions tax (33 per cent) and DIRT (41 per cent) are levied.

Another tax consideration to bear in mind is the Revenue’s crackdown on parents making gifts to their children, so any savings you do gift your children may be incorporated into the overall tax-free allowance parents are allowed give their children before capital acquisition tax (CAT) s levied. The allowance for a child is €250,000 and CAT is levied at a rate of 33 per cent.

When choosing a product, the key is to ensure that any gains are rolled into the fund or deposit account. Digby recommends an interest-up-front deposit account, which pays the interest upfront and this can then be re-invested straight away to get the compounding you are after.

1 Coronavirus: Irish holding back on holiday plans
2 Bank leaked my loan request to family who tried to rip me off
3 Eason acquires rival Dubray Books for undisclosed sum
4 When the Chemistry no longer works – the closing of a leading Irish ad agency
5 Solar panels: Are they worth the investment?
6 Can I see my father’s previous wills?
7 Markets slump as coronavirus spreads around globe
8 Packing company wrapped up in online, design and sustainability
9 What is at stake for Ireland in the new Brexit talks?
10 Appeals board refuses planning for 146 Clonmel homes in ‘fast track’ case
Real news has value SUBSCRIBE
Save money on international transfers