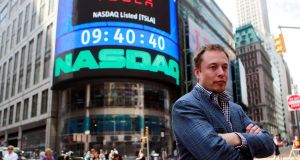 Things just keep getting worse for Tesla. Shares in the electric car stock are down more than 40 per cent this year and fell well below $200 for the first time since 2016 last week.

The bloodletting has really accelerated since Tesla announced a $2.7 billion capital raise in early May. “We don’t expect to spend this capital,” chief executive Elon Musk said at the time, describing it as a “contingency fund”. Soon after, however, a leaked internal email showed Mr Musk urging employees to carefully manage expenses, saying the company would burn through its entire capital raise in “approximately 10 months” at current spending rates. Analysts’ language has been unusually strong. It’s a “code red” situation, said Wedbush Securities, describing Tesla’s profitability target as a “Kilimanjaro-like uphill climb”. Tesla requires “supernatural growth” to justify its current valuation, said Evercore. The stock could fall as low as $36, warned Citigroup, while Morgan Stanley’s Adam Jonas said it could fall to $10 in a worst-case scenario.

Jonas, who has long been bullish on Tesla, warned in a leaked private client call last week that Tesla is no longer a growth story but a “distressed credit and restructuring story”. Investor sentiment, too, has turned; 61 per cent say the stock will hit $100 before $300, according to a Twitter poll conducted by Pension Partners’ Charlie Bilello. Investors can’t say they weren’t warned. “This is just the same old thing that’s been going on a long time,” as Morningstar’s David Whiston said last week. “They keep burning cash. They’re always able to raise more money and everything’s forgiven. Lately, though, after this last capital raise, it wasn’t really forgiven as much.”

Short-sellers have been warning about Tesla for years now, much to the irritation of Elon Musk, who has long complained about manipulative activity. It is one of the most-shorted stocks on the US market, where betting against Tesla has been a losing trade in recent years, allowing Musk to sometimes gloat about his sceptics’ misfortune.

However, the extent of Tesla’s recent declines – the stock has returned to levels first breached in 2013 – means it’s now the shorts’ turn to gloat. Tesla shorts have earned $3.88 billion in profits over the past five months, according to S3 Partners data, and more than $1 billion in May alone. Nor are they inclined to take their profits just yet, with figures showing short interest in the stock has barely budged during the recent sell-off. Any whiff of good news from Tesla could trigger a short squeeze, Bank of America Merrill Lynch argued last week, although S3’s Ihor Dusaniwsky reckons that’s unlikely. Tesla’s share price would have to top $300 for shorts to be deeply in the red again, so the possibility of a short squeeze looks remote, he says.

“Winter almost came for Tesla short sellers,” writes Dusaniwsky, “but now it looks more like spring is in full bloom.”

The ongoing US-China trade spat continued to rattle financial markets last week, and it’s looking increasingly likely that things aren’t going to settle down any time soon. Real progress is unlikely before the US and Chinese presidents meet at the Group 20 summit in late June. JPMorgan now reckons existing tariff hikes are likely to stay in place well into 2020, while the “more severe” scenario of a “full-blown tariff war” in 2019 also needs to be taken seriously. Further tariffs could also become the base case of Goldman Sachs, which says it “has become a close call”. Nomura is even more wary, warning last week there was now a 65 per cent chance that Donald Trump would place 25 per cent tariffs of $300 billion on Chinese products this year. There is, the brokerage added, a “rising risk” tariffs will remain in effect next year as US presidential electioneering gets into full swing.

Until recently, markets had assumed any trade-related damage would be minimal. There was, as Bloomberg’s John Authers put it, an atmosphere of “irrational equanimity”. The recent escalation in tensions shows that equanimity is fading fast.

Smokers are bad investors but they get better returns. That’s according to Smoking Hot Portfolios? Self-Control and Investor Decisions, a new working paper that examines the returns of 19,000 German investors over a seven-year period.

The authors’ hypothesis was that smoking would be an indicator of lower self-control and that this would be linked to lower returns. Sure enough, smokers who managed their own portfolios traded more frequently, held less diversified portfolios, posted lower risk-adjusted returns and underperformed their non-smoking counterparts. However, it appears many smokers were “well aware” of their limitations – instead of “jumping into a wild sea of investment mistakes”, they were more likely than non-smokers to employ financial professionals, the end result being that they bagged better returns.

1 Bank leaked my loan request to family who tried to rip me off
2 Suspicions rife as key Brexit trade talks begin in Brussels
3 Life as a Facebook moderator: ‘People are awful. This is what my job has taught me’
4 Rolls-Royce surges on hopes of solution to Boeing 787 engine glitches
5 Irish companies restrict travel over coronavirus fears
6 Corona beer firm reeling after 8% slide due to coronavirus
7 U2 face closure of loophole they used to avoid paying their taxes
8 Car T-cell therapy: The future fifth pillar of cancer treatment
9 We have little chance of building enough homes to meet election promises
10 How Tony Buzan used mind maps to doodle his way to millions
Real news has value SUBSCRIBE
Save money on international transfers