Investors are giving up on active funds 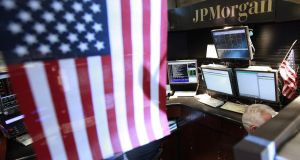 The JP Morgan post on the floor of the New York Stock Exchange. In April, the firm launched a European-listed ETF with a total expense ratio of just 0.04 per cent. Photograph: Brendan McDermid/Reuters

In the United States, as much money is now invested in passive funds as it is in active funds, according to fund group Morningstar. Active fund management is becoming a minority sport as a growing number of investors give up on the idea that they can beat the market, and the trend shows no signs of slowing down.

About $4.3 trillion was invested in index trackers and exchange-traded funds (ETFs) at the end of April, Morningstar noted, adding that its upcoming May report will “almost certainly” show passive fund assets eclipsing active funds for the first time.

It’s a far cry from 1976, when Vanguard’s John Bogle launched the first index fund for ordinary investors, a move that was ridiculed by others in the industry as “un-American” and “a sure path to mediocrity”. Things began to change in the late 1990s as investors took advantage of the growing number of low-cost ETFs hitting the market, although US active funds still controlled five times as much money as index funds in 2000.

“The brutal bear market of the financial crisis appeared to change the landscape for good,” notes Morningstar. “Even though index funds had held the cost advantage, until then many investors still counted on stock-pickers to help them beat the market – and many active managers had marketed themselves as offering better performance in market declines.”

The loss of faith in the financial industry over the last decade has hit active funds hard, with money flowing out of active funds and into passive funds in each of the last 12 years. Investors have instead embraced Bogle’s no-nonsense message that once you “strip all the baloney out of it”, investing is really “all about simplicity and low cost”.

That cost is increasingly regarded as the key consideration is borne out by the data. The cheapest quintile of ETFs have attracted 80 per cent of all net inflows to US ETFs over the last five years, according to the 2019 JP Morgan Global ETF Handbook.

The gap has become even more pronounced lately. The cheapest ETFs have pulled in an incredible 97 per cent of all net inflows over the last year, notes JP Morgan, with Vanguard cutting fees across 21 of its largest ETFs this year alone. Vanguard’s average fund costs investors 0.11 per cent annually, or just $11 for every $10,000 invested, and the group has promised its fees will “go towards zero, without actually touching it”.

Fidelity, the fund giant traditionally famous for its active management division, has gone further, last year launching two zero-fee index funds with no minimum investment. In March, the first ETF that actually pays investors to buy it was launched by Salt Financial, with investors able to avail of a rebate for a temporary period.

Fund firms can make up the revenue shortfall in other areas, such as by lending shares to short-sellers for a fee or by upselling other products or charging for financial advice. A raft of factors – increased investor awareness of low fees, more competition, and the move towards fee-based financial advice rather than fee-based fund management means fees will likely keep coming down, says Morningstar, further hurting the active fund industry.

Active funds remain dominant in Europe, but the same trends are evident. Assets in European ETFs have enjoyed a more than fourfold increase over the last decade and will likely hit $1 trillion by 2020 and $2 trillion by 2024, according to a recent report by Moody’s, which predicts passive funds will account for a quarter of the European fund market by 2025.

European banks dominate fund distribution and they have traditionally prioritised their own more expensive products rather than cheap ETFs, although that will change, says Moody’s, following regulatory changes that encourage advisers to recommend “value for money” products and which increase visibility over fund fees.

That’s echoed by Morningstar; using the US as a barometer indicates European ETFs fees “still have some way to fall”.

That’s not to say that dirt-cheap ETFs aren’t already available. Last year, Lyxor launched ETFs with a total expense ratio (TER) of just 0.04 per cent. That figure was matched by JP Morgan in April, when it launched its BetaBuilders US Equity UCITS ETF, a European-listed ETF offering exposure to the US market.

The active fund industry is trying to stem the tide. Active investors have complained that indexing ignores fundamentals; that it risks making markets less efficient (“worse than Marxism”, as one high-profile report put it); that it hurts the economy; and that passive funds make for passive shareholders who do not fulfil their stewardship duties.

More productively, perhaps, they have aggressively cut costs, Bank of America Merrill Lynch (BAML) noted in a recent report, as well as increasing their active share.

Active share refers to the percentage of a fund’s holdings that differs from benchmark indices. Funds with a low active share are often seen as closet indexers, whereas truly active fund mangers aim to build funds that differ substantially from indices in order to give themselves a chance of serious outperformance.

The fact active funds have cut costs and increased active share shows managers are increasingly listening to critics and doing what they should be doing. Nevertheless, it hasn’t been enough; try as they might, active funds can’t match index funds on costs and investors remain unconvinced by promises of market-beating performance, judging by the tide of money that continues to flow into passive products.

Can active funds do anything else to protect their diminishing market share?

Others say managers should opt for a more concentrated approach, holding dozens of stocks as opposed to hundreds. That risks serious underperformance but it also gives investors a genuine shot of outperformance. Managers are devoting increased attention to subtle behavioural biases that can hobble performance.

Most important, BlackRock managing director Ronald Kahn said last month, is the “explosion” in available data and developments in machine learning. “If there’s any great news for active management,” Kahn said, “this is it”, describing it as the “greatest new opportunity for active management in many years”.

Nevertheless, the average active manager will continue to underperform, says Kahn. Over the last decade, 87 per cent of active US funds underperformed their benchmarks and the figures are similarly grim outside the US. In Europe, a majority of active managers outperformed their average passive peer in only three of the 49 categories examined by Morningstar in the decade through December 2018.

The problem is that increased competition means markets are more efficient than ever, says Kahn, a point also made by Moody’s. The low-fee revolution, says Moody’s, will kill off funds with little to offer so “only the best players will survive, leading to a more difficult game” for the remaining active managers.

If true, that’s bad news for the active fund industry, as continued underperformance will surely mean it keeps shrinking as more and more investors opt to take a passive approach.

1 ‘I’m so lucky to be in the Caribbean – a million miles from Derry Girls’
2 ‘The recovery needs to be a full-scale economic renewal’
3 Ten of the most mysterious aircraft disappearances
4 Tobacco makers still trying to make a mint from Irish menthol market
5 Ryanair expects air fares to fall when flights take off again
6 Who are Ireland’s 17 billionaires?
7 O’Leary casts unwelcome light on a very Irish political compromise
8 Wetherspoon's plan for pub in Dublin's Grand Canal Dock on hold
9 Denis O’Brien forced to lift hood on Digicel in debt restructuring
10 ‘It’s safe to fly’, EU aviation safety boss says
Real news has value SUBSCRIBE
Save money on international transfers