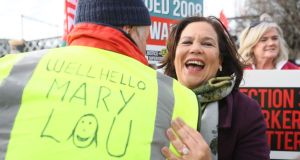 Investors in Irish stocks weren’t pleased by Sinn Féin’s strong showing in the general election, with banking and property stocks tumbling following the result. Should investors be worried or did markets over-react?

Many observers have made the case for calm. Ibec chief executive Danny McCoy said businesses would “absolutely” be able to work with Sinn Féin. “People need to be relaxed about this,” said former Fine Gael TD Brian Hayes, now head of the Banking and Payments Federation Ireland.

Any coalition agreement would necessitate Sinn Féin watering down many of its economic policies, said Hayes, a point also made by analysts at Davy, Goodbody and Cantor Fitzgerald.

One study, Do Markets Punish Left Governments?, comes to a similar conclusion. Examining 205 elections in 22 OECD countries since the 1950s, the study found stocks drop after left-wing and rise after right-wing election victories, but the size of this reaction “strongly depends on the political constraints” facing the incoming government. When political constraints increase, the market response decreases and “fully disappears for high levels of political constraints”. Coalition partners represent an obvious constraint, the paper notes.

One word of caution, however. The paper notes coalition politics also increase uncertainty surrounding elections. Typically, markets continue to jump around until the exact make-up of the new government is known, suggesting stock prices may not settle down for some time yet.

1 Policy failed us during the banking crisis and it’s failing us again
2 Aryzta to pursue asset sales as takeover talks fail
3 Samsung patriarch Lee Kun-hee dies at 78
4 Retailers accused of ‘stealing business’ from rivals by flouting restrictions
5 No-deal Brexit could trigger rise in food prices, says Simon Coveney
6 How long can Government afford to keep State pension age at 66?
7 Ireland’s €200bn debt burden: how did we get here?
8 ‘French people are pretty relaxed. They don’t pander to scaremongering or hysteria’
9 Help, I’ve no PRSI stamps – can I still get a pension?
10 Irish house prices could buck European trend and fall this year, says S&P
Real news has value SUBSCRIBE
Save money on international transfers