Fact checking the State of the Union address adds to Trump’s 16,000 lies as president 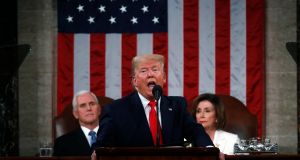 Donald Trump has told more than 16,000 lies as president, according to the Washington Post, so it was hardly surprising that a few stock market porkies crept into his State of the Union address last week. “Stock markets have soared 70 per cent, adding more than $12 trillion to our nation’s wealth, transcending anything anyone believed was possible,” he said. “All of those millions of people with 401(k)s and pensions are doing far better than they have ever done before, with increases of 60, 70, 80, 90 and 100 per cent, and even more.” Including dividends, stocks were up around 65 per cent at the time of his address – a relatively mild exaggeration by Trump standards. Numbers aside, the idea this transcends “anything anyone believed was possible” is silly; the market performance “hasn’t been particularly brilliant” under Trump, said Desmond Lachman of the right-leaning American Economic Institute.

Even sillier is the notion that pension funds are “doing far better than they have ever done before”. It has been 39 months since Trump’s election win; stocks enjoyed better 39-month periods in the presidencies of Barack Obama, George W Bush and Bill Clinton, Trump’s three immediate predecessors. Stocks looked expensive when Trump was elected so they have certainly done better than most commentators expected.

The idea we have witnessed something unprecedented, however, is a very Trumpian one.