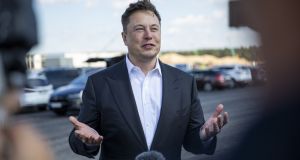 Tesla head Elon Musk. The company lost a third of its value in a week, but still the stock remained above its 50-day moving average. Photograph: Maja Hitij/Getty

Tesla, for example, lost a third of its value in a week; that sounds like a serious crash, but the stock remained above its 50-day moving average. Zoom lost more than a quarter of its value but didn’t even come close to breaching its 50-day average. Apple lost a fifth of its value, losing more than $400 billion in market capitalisation in the process; nevertheless, that merely brought the stock, which remained above its 50-day average, back to where it was trading in most of August.

The Nasdaq 100 also closed above its 50-day average, despite falling 10 per cent in just three trading days. The stats reflect just how technically overbought tech stocks had become. That aside, both bulls and bears can use the data to support their investing theses. Bears can argue any sell-off has further to go and that speculative excess is still embedded in market prices; bulls can argue the uptrend remains intact and that this is no more than a routine pull-back in an ongoing rally.

1 Air travel never going ‘back to way it was’
2 Will brother’s widow get half of our parents’ estate when they die?
3 Should I switch bank now with Ulster Bank at risk of closing?
4 ‘Tax war’ will hit Ireland if digital tax talks fail, OECD says
5 Pallet manufacturer looks to imports as timber crisis takes root
6 GVA Donal O Buachalla rebrands as Avison Young
7 Irish insurers in focus as UK cracks down on dual pricing
8 Tourism and aviation players demand von der Leyen end EU travel chaos
9 Thinking time: Why it should be essential in every workplace
10 How Tony Buzan used mind maps to doodle his way to millions
Real news has value SUBSCRIBE
Save money on international transfers