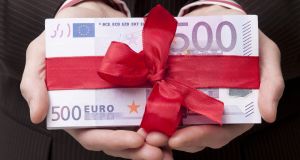 The current tax-free threshold for gifts or inheritances from a parent to a child is €335,000

I read the Q&A recently about gifts and inheritance and one question struck me. What happens should the threshold fall in the future?

So he receives €10,000 inheritance but is hit with a €40,000 tax bill. So basically he would be getting a tax bill on the gifts on which, when they were received, there was no CAT liability. Is this correct?

Fortunately, the thresholds for people receiving gifts or inheritances are currently either rising – for transfers between parents and children – or, in the case of inheritance and large gifts between other relatives and friends, staying the same. But, for peace of mind, let me assure you that your interpretation is not correct.

Which is good news because the situation you outline – where you could get hit with a tax bill bigger than the current gift or inheritance – would be deeply unfair and throw the whole system into chaos.

I obviously wasn’t clear enough in explaining things in the piece to which you refer at the end of last month. The key, as I did state then, is that capital acquisitions tax (CAT) is levied on a “point in time” basis.

So, if you previously received gifts or inheritances up to a limit that was in force at the time and that limit subsequently rises, there is nothing to stop you receiving more tax-free up to the new limit.

The amount you can receive is determined by the limit in place at the time the gift is made or the inheritance received.

But what about when the threshold falls – as it did during the financial crisis post-2008?

Well, if you had hit a previous, higher threshold, it means that anything further you receive will be taxed. However, there is no retrospective element to it. They don’t go back and tax what was previously declared exempt.

In your example, the threshold has fallen from €335,000 to a notional €225,000. The person has previously received a total of €335,000 when that threshold was in place and they now receive another €10,000 (presumably from parents, otherwise a separate threshold would apply).

Equally, if the threshold subsequently recovers to more than €345,000, you cannot claim back the tax paid as it was liable at that point in time.

To avoid confusion for those coming fresh to the issue with this question, the current tax-free threshold for gifts or inheritances from a parent to a child is €335,000.