CEOs from Amazon, Apple, Facebook and Google will testify in front of the US Congress at the end of July 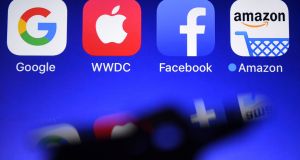 The CEOs of Amazon, Apple, Facebook and Google will testify in front of Congress at the end of July in what could turn into a serious antitrust investigation. Photograph: Damien Meyer/AFP/Getty Images

The biggest tech stocks keep getting bigger. Last month, Apple and Microsoft became the first American companies to be valued at more than $1.5 trillion. Amazon followed in their footsteps last week while Google parent Alphabet is also a trillionaire.

Shareholders are thrilled but the tech giants may be getting too big, cautions investment strategist Joachim Klement.

CEOs from four tech companies – Amazon, Apple, Facebook and Google – will testify in front of the US Congress at the end of July. That could turn into the first serious antitrust investigation in 40 years and have a similar impact on Big Tech as the 1990 tobacco lawsuits on Big Tobacco, Klement argues, but investors continue to price in “incredible growth” rates.

If Facebook meets its growth expectations, it will generate $136.8bn in profits by 2030.

Overall, Amazon, Apple, Facebook and Google’s annual profits will account for about 2.5 per cent of US GDP by 2030, compared to 0.56 per cent today.

That’s a problem, says Klement. If they get into financial difficulty, it could push the US economy into recession. Not only will they be too big to fail, they will be too big to lose money, allowing companies to blackmail authorities into providing the support they desire.

Accordingly, antitrust action is inevitable, says Klement, but this curtailment of their businesses is not priced into shares. Consequently, an eventual share price crash “is thus not a question of ‘if’, but ‘when’”.

1 In this strangest of recessions, what happens next for Ireland?
2 Michael O’Leary is the boss you want to lead an airline out of crisis
3 Bank of Ireland sees about 2,000 staff apply for voluntary redundancy
4 Best Covid-19 ‘influencers’ will avoid hectoring
5 Should I switch bank now with Ulster Bank at risk of closing?
6 Estée Lauder staff at Dublin airport plan further strike action
7 Overhaul of lease arbitration regime would be a game changer for retailers
8 Fortnite owner signs multimillion deal to buy Irish ‘kidtech’ firm
9 Dunnes Stores set to enter grocery delivery market
10 Air travel never going ‘back to way it was’
Real news has value SUBSCRIBE
Save money on international transfers