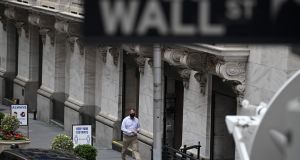 Traders wearing masks arrive before the opening bell at the New York Stock Exchange on May 26th. Photograph: Johannes Eisele/AFP via Getty

“One of the most impressive mismatches in history.” That’s how GMO founder and veteran investor Jeremy Grantham describes the current market in his latest quarterly letter, warning the current US market valuation is in the top 10 per cent of its history even as the US economy is in its worst 10 per cent, “perhaps even the worst 1 per cent”.

GMO has reduced its net equity exposure from 55 to to 25 per cent, near levels it hit during the global financial crisis. Now, bulls could point out that Grantham and GMO have been too cautious for most of the last decade. Still, it’s hard to argue stocks aren’t richly valued. The S&P 500 trades on 21.5 times expected earnings for the next year, according to FactSet, the highest level in 18 years.

Goldman Sachs says stocks can justify today’s levels if earnings rebound strongly in 2021, although they look substantially overvalued if earnings disappoint. Investor expectations are “achievable but optimistic”, says Goldman, but even meeting these high expectations would “validate” current prices rather than push them substantially higher.

There is, then, little room for error, despite the investment landscape being dotted with obvious “medical, economic and political risks”.

GMO is often criticised for being too bearish, but the overall valuation picture would seem to confirm this is, as Grantham puts it, a time for “caution and patience”.

1 In this strangest of recessions, what happens next for Ireland?
2 Michael O’Leary is the boss you want to lead an airline out of crisis
3 Bank of Ireland sees about 2,000 staff apply for voluntary redundancy
4 Best Covid-19 ‘influencers’ will avoid hectoring
5 Should I switch bank now with Ulster Bank at risk of closing?
6 Fortnite owner signs multimillion deal to buy Irish ‘kidtech’ firm
7 Ireland’s Covid-19 economy in five graphs
8 EY Entrepreneur of the Year: nominee profiles
9 Estée Lauder staff at Dublin airport plan further strike action
10 Ireland is in danger of losing the woods for the trees on emissions reduction
Real news has value SUBSCRIBE
Save money on international transfers