Will Elon Musk ever learn?

Stocktake: Tesla chief’s ongoing carelessness a cause of concern for investors 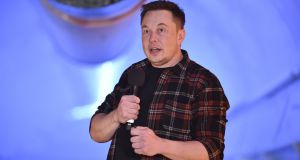 Electric carmaker Tesla’s mission is “critical to the future of our planet”, said the company’s top lawyer Dane Butswinkas when joining the company in December, adding: “It’s hard to identify a mission more timely, more essential, or more worth fighting for.”

Two months later and Butswinkas is gone, the latest in a long line of top Tesla executives to leave in the last year. Butswinkas did at least last longer than Dave Morton, who quit the company less than a month after becoming chief accounting officer last August.

Musk got into hot water last year after tweeting he had secured funding to take the company private at $420 per share. Shares soared and then dived after it became clear no deal was forthcoming, prompting US regulators to slap $20 million fines on Tesla and Musk.

Musk continues to be careless in his tweeting, last week saying Tesla will make “around” 500,000 cars in 2019.

That was news to investors, prompting Musk to correct himself hours later. He “meant to say” Tesla’s annualised production rate would be around 500,000 cars at the end of 2019, or 10,000 per week.

“Deliveries for year still estimated to be about 400k”. Musk was fortunate markets were closed at the time of his tweets, but investors must be concerned he is not changing his careless ways.

“This is a $50-$60 billion market cap company”, Loup Ventures founder Gene Munster bemoaned last week. “This should not be run like a start-up.”

The S&P 500 has gained in eight of the last nine weeks and over 90 per cent of stocks were recently trading above their 50-day averages. Are indices dangerously overbought?

Canaccord Genuity strategist Tony Dwyer looked at previous instances where at least 90 per cent of stocks traded above their 50-day average. Since 1990, stocks have enjoyed median three, six and 12-month gains of 5, 9 and 16 per cent, respectively.

These figures are not distorted by a handful of outliers.

Baird investment strategist William Delwiche also crunched the numbers and found 18 such instances since 1970. One month later, the S&P 500 was higher on 15 occasions.

Three months later, stocks gained on all but two occasions. After six months, stocks were higher in 17 of the 18 instances. One year later, the index was higher on every single occasion.

No one knows how the future unfolds, says Delwiche, “but the historical track record here is pretty nice to have in your back pocket”.

Last Thursday’s American Association of Individual Investors poll showed a minor increase in bullishness, but there isn’t a hint of euphoria, with bullish sentiment now beneath 40 per cent for 14 consecutive weeks – the longest such streak since last spring, notes LPL Research. Sentiment among professional investors is similarly cautious, according to Merrill Lynch’s latest fund manager survey.

However, some excitement is suggested by a separate measure, the National Association of Active Investment Managers Exposure Index, which recently exceeded 80 for the first time since October. That suggests optimism is elevated, if not extreme.

The same picture emerges from CNN’s Fear and Greed Index, a composite tool which tracks seven sentiment indicators. Last week, it peaked at 70, which suggests some greed has crept into markets, but it remains shy of the 80 level suggesting extreme greed. Overall, it seems sentiment is no longer a tailwind for stocks, but nor is it a headwind.

Shares in Italian footballing giant Juventus tanked last week, falling 10 per cent after they suffered a 2-0 defeat to Atlético Madrid in the first leg of their last-16 Champions League clash.

The interesting part is it was hardly a shock result. Yes, Juve were favourites but investors and casual football fans know Atlético are a strong side that has featured in two Champions League finals over the last five years.

The lesson, perhaps, is a stock is inherently vulnerable when a lot of optimism is baked into the stock price.

Juventus shares more than doubled after buying Cristiano Ronaldo last July, giving the company a valuation of more than €1.5 billion. Much of those gains were subsequently lost only for the stock to take off again, gaining over 50 per cent since December’s announcement that Juventus was to be added to Italy’s FTSE Mib index.

The problem with betting on football matches is, if you’re wrong, you lose your entire stake. Juve’s share price fluctuations might persuade football fans to try a different approach – going long or short on the stock.