Looking to boost your income? eToro is looking for Irish freelance fund managers 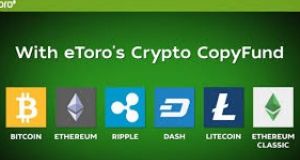 Minimum investment on eToro is $200, and when investors get to the level of $10,000 they are assigned an account manager.

EToro, the Israeli social trading platform, is ramping up its presence in Ireland. The company is looking for freelance traders to join and trade a host of top cryptocurrencies, exchange-traded funds and thousands of stocks, as well as trading currency pairs, indices and commodities via contracts for difference (CFDs).

Launched in 2007, eToro started life primarily as a trading platform. However, in 2014 it added crypto to its platform, before adding another nine cryptocurrencies, including ethereum and ripple, in 2017.

It now operates in 140 countries, with more than 10 million users, and is a multi-asset platform where investors can buy everything from shares to crypto, and invest in CFDs.

“We’re the only platform right now where you can buy Facebook and crypto at the same time,” said Iqbal Gandham, UK managing director for eToro.

Minimum investment on the site is $200, and when investors get to the level of $10,000 they are assigned an account manager. The platform doesn’t charge fees as it makes its money from the spreads it offers on transactions.

It is regulated in the UK by the Financial Conduct Authority, and across Europe by the Cyprus Securities & Exchange Commission.

Traders can use the site in one of three ways: as a traditional online investing platform; by using the platform to create an investment portfolio, such as a portfolio of seven cryptos; and the most popular method, which is “copy trading”.

This involves copying the trades of a successful trader, known as “popular investors”, whereby every time they sell, you sell too, with each trade mirrored.

“It’s a bit like using a fund manger to manage my money,” says Mr Gandham.

For novice investors, or those not interested in running their own trades, the tool allows them the possibility of attaining outsize returns. One of the most copied investors, for example, is UK trader Jay Edward Smith. He is up by 95 per cent over the past 12 months, and has more than 12,000 “copiers”.

This means a tasty stream of additional income for him, as eToro pays him up to 2 per cent of copy assets under management. At one point, a trader on the site had assets of some $30 million following him – akin to annual fees of about $600,000.

One of the most profitable Irish traders is “danlup”, and his portfolio is up by 41.6 per cent on the year. His strategy is to “invest exclusively in the best eToro traders”, while his own trades are based only on currencies. Another Irish trader, “murphmi5”, is up by 38.6 per cent over the past 12 months, and has 14 people copying his strategy.