Short-termist stock markets: is it time to scrap quarterly reporting? 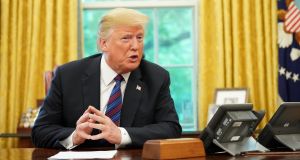 US president Donald Trump has asked the Securities and Exchange Commission to look into doing away with mandatory quarterly reports for public companies. Photograph: Mandel Ngan/AFP/Getty Images

Quarterly earnings reports have been a staple of America’s financial markets since the 1930s. Now, the US may be about to follow Europe’s lead and abandon a practice increasingly seen as short-termist and counter-productive. Is quarterly capitalism, as it is sometimes dubbed, holding back companies? Or does moving to a biannual reporting system reduce transparency for investors looking for timely information on their investments? Last month, Donald Trump asked the Securities and Exchange Commission (SEC) to look into doing away with mandatory quarterly reports for public companies and instead move to a six-month system, saying “some of the world’s top business leaders” had argued for the move.

The focus on meeting quarterly earnings estimates, critics say, promotes corporate short-termism, hurting long-term shareholders as well as the wider economy. This position is becoming an increasingly mainstream one. Trump’s predecessor, Barack Obama, has criticised quarterly earnings pressures. In 2013, the European Commission ended the quarterly requirement for public companies, instead moving to a semi-annual system. Britain has done likewise, with politicians and investors alike broadly welcoming the 2012 report from economist John Kay which proposed the scrapping of quarterly earnings reports as part of a broader package of measures designed to curtail short-termism in financial markets.

UK companies are free to continue issuing quarterly reports if they wish to do so, but fund giants Legal & General Investment Management and Schroders as well as the Investment Association, Britain’s main association of money managers, have all called for them to end the practice. Today, more than 40 per cent of FTSE 100 companies and two-thirds of the more domestic-focused FTSE 250 no longer issue quarterly reports. In the US, iconic investor Warren Buffett and JP Morgan chief Jamie Dimon issued a joint statement earlier this year warning that quarterly earnings guidance “often leads to an unhealthy focus on short-term profits”. That stance is shared by Larry Fink of BlackRock, the world’s largest asset manager, who has said the “culture of quarterly earnings hysteria is totally contrary to the long-term approach we need”.

The mood “does seem to be shifting”, said Andrew Ninian of the Investment Association recently.

Scrapping this requirement “is a horrible idea from an investor’s point of view”, high-profile banking analyst Dick Bove cautioned recently, saying it would be a “major move to provide less information”. That was echoed by George Soros’ former trading partner Stanley Druckenmiller, who complained it would make investing more “challenging”. Chief executives might have little sympathy for hedge fund managers like Druckenmiller, who likes to trade in and out of stocks. However, Harvard economist and former US treasury secretary Larry Summers says investors should be wary of chief executives stressing their long-term vision.

“Just as my students often suggest that the grading system forces them to study a particular syllabus rather than pursue their intellectual passions, managers prefer to avoid frequent accountability for results,” Summers argued in a recent Financial Times opinion piece.

Although “progressive critics and chief executives alike” are united in condemning what they perceive as short-termism, scrapping quarterly reports would allow managers to wait longer before they revealed important problems, warned Summers. It would also further disadvantage ordinary investors, he added, as less public information would favour professional investors who are in constant touch with company management. His concerns are shared by Robert Pozen, formerly of fund giant Fidelity and now a lecturer at MIT Sloan School of Management. A lot can happen in six months, said Pozen; if this information is kept in-house rather than released to the public, the “temptation and potential for insider trading would rise substantially”.

It could also lead to inaccurate market pricing, with Pozen pointing to a study which contradicted the European Commission’s contention that quarterly financial information is “not necessary for investor protection”. The study found that when investors didn’t receive quarterly reports from non-US companies, they relied on information contained in the quarterly reports of US companies in the same sector. However, non-US and US companies are different in some key respects.

The end result was markets overreacted to the US reports, resulting in non-US companies being mispriced for many months. Study co-author and Indiana University business professor Salman Arif was blunt when discussing his findings last month: “If you’re taking away information from investors, they will be desperate for any signals on performance.”

“Six months simply does not constitute the long term”, said Pozen, and the idea that moving to a biannual reporting system will curtail short termism is a “pipe dream”.

Last year, Pozen co-authored a CFA Institute report that examined the impact of reporting frequency on UK companies. Mandatory quarterly reporting was introduced in the UK in 2007 and abandoned in 2014. Pozen found the initiation of quarterly reporting in 2007 had “no material impact” on the investment decisions of UK companies. After 2014, some UK companies continued to report quarterly, while others abandoned the practice. In terms of changes in capital expenditure and research and development spending, there was no difference between “stoppers” and “continuers” post-2014.

Moving from quarterly to semi-annual reports, the study concluded, was “not an effective remedy” for corporate short-termism. Far from eliminating the focus on short-term noise, twice-a-year earnings reporting may magnify it, cautions money manager and Bloomberg columnist Barry Ritholtz. It would “make the event so momentous, with such focus on it, that any company that misses analysts’ forecasts will find their stock price shellacked”, he warned. “The twice-yearly focus on making the per-share number will become overwhelmingly intense”.

More frequent reporting makes the data less significant, so moving to a monthly system, with the goal of eventually moving to daily fundamental updates, would mean the “obsession” with short-term profits would “all but disappear”. Critics of quarterly reporting have it “exactly backward”, said Ritholtz.

“This is the most myopic president in history”, said Druckenmiller. “He doesn’t think – in any way – long term. I find it very rich that he’s proposing this with some veil that it’s going to help companies think long-term. As an investor, I find it troubling.”