Police talk of a wave of sophisticated fraud 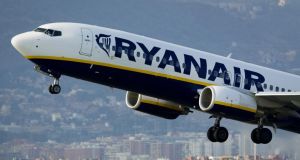 In April, about $5 million (€4.5 million) was removed from a Ryanair account by electronic transfer via a Chinese bank. The Criminal Assets Bureau in Dublin was asked to assist in its recovery via counterpart agencies in Asia, and the authorities were able to track down the funds, which were reportedly returned. Photograph: Josep Lago/AFP/Getty Images

Perhaps it’s the slowing economy, but there has been a rash of reports of high-profile bank scams taking place in China recently. While oversight is improving in business in China, some of the scams are old tricks, although generally they have very contemporary characteristics.

There have been two high-profile Irish victims of the scams, which involve either fake bank details being used in transactions, or individuals being told they are in serious trouble with the police and must pay up or risk jail.

Convincing websites and very convincing phone calls from able grifters are used to back up these claims and the victims have taken in some very savvy people, including some of Ireland’s top companies.

In April, about $5 million (€4.5 million) was removed from a Ryanair account by electronic transfer via a Chinese bank. The Criminal Assets Bureau in Dublin was asked to assist in its recovery via counterpart agencies in Asia, and the authorities were able to track down the funds, which were reportedly returned.

Galway-based toolmaker C&F Automotive was defrauded of $428,934 (€385,084) after one of its Chinese suppliers had their bank account apparently hacked and funds were transferred to a false account.

C&F, owned by John Flaherty, has used supplier Kingvow, in the Chinese city of Dongguan for many years. When paying an invoice in May, the company was asked to pay into a different account.

The money had been transferred to a bank in Jinhua in Zhejiang but getting a statement from the Chinese police was a tough task. Eventually the Hong Kong police said that they could do nothing as the scam was part of a wave of fraud, of which C&F’s troubles were just a small part.

Li Yuanrong, a 73-year-old Chinese soprano, was victim of the largest single scam. She received a call from a man claiming to work at the Hong Kong post office, telling her she was accused of involvement in a deception case in China.

She was told the call was transferred to Shenzhen police and then the prosecutor’s office before she was asked to pay money, and she was told not to tell her family.

She transferred a total of HK$20 million (€2.32 million) into several mainland bank accounts in six or seven payments. Reportedly, she ignored warnings from bank staff and a remittance company, and later told police she was too frightened to say no.

In Hong Kong, there has been a spate of telephone scams and in July, gangs of phone scammers cheated Hong Kong people out of HK$126 million (€14.59 million) in 308 cases.

Typically, the scammers tell victims they have broken the law before directing them to fake police officers or government websites that show forged arrest warrants.

This is what happened to Denise C, who works for a PR company in Beijing and who lost her life’s savings, €29,000, in four hours.

She was accused of involvement in a scam in China, and the website she was directed to was practically identical to the real thing – the scammers are growing in sophistication.

One man was arrested for using social media to fool his 17 girlfriends into believing he was their one and only, and squeezing money out of them. He was caught when they all came to visit him in hospital.

In Hong Kong, the police director of crime and security Lo Mung-hung led a team of officers to attend a meeting organised by the mainland Chinese Ministry of Public Security.

Lo said police on both sides of the border would take joint action against scammers, as well as sharing regular intelligence and co-ordinating investigations, but he admitted it was a tough battle.

“Once they get the money, in no time it will be put in many different accounts, so the chance of getting all the money back is slim,” Lo told the South China Morning Post.