Government will address pensions anomaly but only from 2020

FF can’t be trusted, says Doherty, as it ‘took credit for everything else in the Budget’ 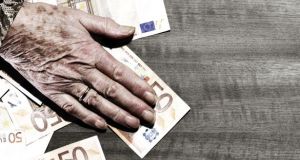 The Government has promised reform of the State pension system from 2020 but only for people who start work from that date. Photograph: Getty Images

The Government has promised reform of the State pension system from 2020 but only for people who start work from that date.

Minister for Employment Affairs and Social Protection Regina Doherty said that, from 2020, a new “total contribution” system would be put in place.

This system would base eligibility for a State contributory pension on the total number of PRSI payments made during a working lifetime.

At the moment, eligibility is based on a system called “averaging,” where an average number of contributions made each year is counted, with a minmum number required for any pension.

It takes the first PRSI stamp paid as the starting point even when that might be in relation to a part-time student job.

Up to 40,000 people, many of them women who left or were forced to leave the workforce decades ago to raise families, are disadvantaged by the current method of assessing the State pension.

Those who took time out of the workforce since 1994 have been able to discount up to 20 years from their working life for the purposes of calculating their State pension, but many of those reaching retirement now would have left work before 1994.

The post-1994 discounting only applies to those who left work to raise a family or to care for relatives.

In 2012 the system was changed further, to double the minimum number of contributions required. More bands were also added, which cut the pension by up to €30 a week, for elderly people with reduced contributions, many of them women.

The Minister said public consultation on proposals to address inequalities in the current regime will start in November.

Speaking on RTÉ’s Morning Ireland, Ms Doherty said the current system was a very fair system but that the Government would move to a total contribution system from 2020. The change would only apply for new entrants to the workforce from that time.

The Minister said Government efforts to address the “anomaly” of people disadvantaged by the current system were ongoing but were complicated by the fact that digital records of PRSI payments dated back only to 1984.

She said officials in her department were trawling through a huge amount of paper records from earlier years to assess the full extent of the issue.

“Each of these paper records has to be gone through so that I can fix this and not create another anomaly,” she said.

She said that when she had a definitive value for the money involved, it would go to Cabinet for discussion “on what we can do, if we can do anything”.

“There is an absolute will that [the position of] people disenfranchised by the current averaging system will be addressed,” the minister added.

“Every system has winners and losers. The pensions system at present is the fairest it has ever been,” she said .

She said the planned public consultation would be an “opportunity to totally overhaul the total contributions method from 2020.

“It will make the system straightforward, you will get from your pension exactly what you put in.”

The system at present is “absolutely as fair as it can be”, she said. Once the changes are made there will be no anomalies. But the changes will only be for new entrants, she warned.

She was adamant that the issue was not discussed in Budget negotiations despite an assertion by Fianna Fáil’s Finance Spokesperson Michael McGrath that Dara Calleary had discussed the matter with Paschal Donohoe under Public Expenditure.

Fianna Fáil can’t be trusted, she said, given that it “‘took credit for everything else in the Budget”.

Mr McGrath called for a plan to address the anomalies. “At the moment about 36,000 people are losing out, but that number will grow as time goes on. The changes made in 2012 have disproportionately impacted on women,” he told Morning Ireland.

“There is a genuine issue here that disproportionately impacts on women. There are clear anomalies that need to be addressed.

“Some people are down by €30.80 per week which is €1,600 a year. Because many women would have left the workforce for a period of time to rear a family, their yearly average would have been brought down.

“We now have the perverse scenario whereby some people with fewer contributions, because they started working later in life, are actually getting a higher pension than people who might have had a summer job in the late 1960s or early 1970s.

“Because they started much earlier on all of those years are included in the calculation of the yearly average, that pulls down their average, puts them into a lower band, results in a lower pension - there are serious anomalies.”

Mr McGrath said that Fianna Fáil have been consistently ‘on the issue’ since 2012.

Taoiseach Leo Varadkar yesterday defended the Government’s decision to reject a Fianna Fáil motion calling for full pension entitlements to be restored to 36,000 people, 60 per cent of them women, who took time out from the workforce before 1994 or who worked part-time.

He warned against a change being made “in isolation” to the pensions system . He said amendments should be comprehensive, “so we don’t create new injustices”.

But Mr McGrath said: “This evening in the Dáil we are seeking to create a road map whereby this issue can be addressed.

“We heard from the Taoiseach yesterday that only now are the government preparing to move towards public consultation. Are we really going to be at that point by 2020 and in the interim what’s the message for people?

He denied that Fianna Fáil was “jumping on the bandwagon” as claimed by Sinn Féin.

“It was raised by Dara Calleary with Paschal Donohoe on the Expenditure side, as with any negotiation you don’t get everything you want.

Mr McGarth acknowledged that tackling the anomalies “will cost real money - we’re not like Sinn Féin, we’re realistic we’re not setting expectations that cannot be delivered.

“It costs €60million to revert to previous bands, and then an additional €10million each subsequent year.”

Minister for Social Protection Regina Doherty has admitted that the pension system “is not kind” to the people impacted by the 2012 changes.

“Every system has winners and losers. The pensions system at present is the fairest it has ever been,” she told RTE’s Morning Ireland.

However, Ms Doherty did acknowledge that more than 40,000 people were being treated differently because of the 2012 changes to the contributory pension scheme.

The planned public consultation on pensions is an opportunity to rectify the situation she said.

“It will be an opportunity to totally overhaul the total contributions method from 2020. It will make the system straightforward, you will get from your pension exactly what you put in.”

The system at present is “absolutely as fair as it can be,” she said. Once the changes are made there will be no anomalies. But the changes will only be for new entrants, she warned.

She was adamant that the issue was not discussed in Budget negotiations despite an assertion by Fianna Fáil’s Finance Spokesperson Michael McGrath that Dara Calleary had discussed the matter with Paschal Donohoe under Public Expenditure.

She warned that the pension issue is very complex and could not be “tinkered with”.

“We’re going to be very careful to look at everything.”

Ms Doherty pointed out that files and records prior to 1984 are on paper and it will take time for them to be thoroughly examined “so we can see the whole situation and ensure there are no more anomalies.

“I don’t genuinely know how much more it is going to cost. When we have the full details the Cabinet will make a decision.”

“Quite frankly, they (her comments) were reprehensible. I want to state clearly and unequivocally that the matter was raised in the course of Budget negotiations.

“Fianna Fáil has adhered faithfully to the Confidence and Supply agreement for the past 18 months often in the teeth of opposition and upset from our supporters who would prefer if we simply brought down the government,” he told RTE’s Today with Sean O’Rourke show.

“I would ask Regina Doherty to reflect on that statement.

“I resent it because I’ve had to go into the Dáil and support the Government on occasions, which my own supporters were very unhappy with and I’ve had to go back and explain that I did it for stability and in the interests of the country.

“Then we get a Minister who is a beneficiary of that arrangement coming out and making a statement that we can’t be trusted.

“She was happy enough to trust us to vote her into office and to keep her in office for the last 18 months.