Longford the only county raising local property tax next year

Longford will raise tax 15% for 2019; Fingal residents will still pay higher rate than other Dublin homeowners 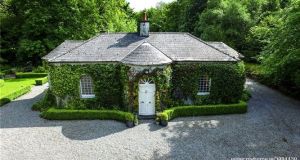 On the market for €225,000 in Co. Longford, the new owner of this former gate lodge will have to pay €465 in property tax next year

Longford is the only county in Ireland where property owners will pay more property tax next year, after the local authority voted to apply a 15 per cent increase to the base rate. Last year a 5 per cent increase applied, and the move means someone with a home valued at €150,000-€200,000 will now pay almost €50 more in tax for 2019.

Local councils have the right to modify the rate of property tax that will be applied by the order of 15 per cent up or down, known as the “local adjustment factor”.

The basic LPT rate is set at 0.18 per cent for properties valued under € 1 million and 0.25 per cent on the amount of the value over €1 million. Local authorities must notify the Revenue Commissioners of their intentions by September 30th of the preceding year.

This year, according to the Revenue Commissioners, nine local authorities adjusted their rates, with Longford the only county pushing up the base rate. It is the county with the joint lowest property tax take in the country, collecting just €2.1 million in 2017, and the rationale behind the latest increase in the tax is to help fund a wider regeneration strategy for the country.

In Dublin, the county where the highest property tax bills are paid, the four Dublin councils voted to maintain the decreases they have applied in recent years. Dún Laoghaire-Rathdown, for example, will keep its 15 per cent reduction for 2019, which means a property owner with a house valued at €500,000-€550,000 will pay €803 next year, or €142 less than they would have otherwise. Dublin city also applies the full 15 per cent reduction, as does South Dublin. Fingal, however, has agreed only a 10 per cent reduction, which means homeowners in Swords and Castleknock will pay higher bills than their neighbours across the city in similarly valued homes. For example, a home in Fingal in a similar value band to one in Dún Laoghaire-Rathdown will be subject to a tax bill of €850 next year – or €47 more.

The Dublin-based local authorities are the only ones across the country to apply a decrease; some other counties have voted to maintain increases in the rate of property tax applied this year.

These include Laois (+10 per cent); Limerick city and county (+7.5 per cent); Wateford city and council (+2.5 per cent) and Wexford (+10 per cent). These higher rates of tax mean that a homeowner living in Limerick, for example, with a house valued at €251,000, will pay €37 a year more in tax than their neighbour in Clare with a similar house. While some councillors had argued that the base rate should have been increased 10 per cent, the 7.5 per cent increase nonetheless means that more than €1.2 million extra will be available to spend on services in the city and county.

But some counties and local authorities have moved to cut how much tax their residents pay. Last year Kerry County Council applied a 5 per cent increase to the base rate, which meant someone with a home valued at €100,000-€150,000 had to pay €236 in property tax this year. Next year, however, their bill will drop back to €225, after the local authority agreed to remove the increase for 2019.

Staying at the base rate

Many other counties and local authorities, such as Mayo, Clare, Carlow, Meath and Cork city, voted against an adjustment factor, and continue to apply the base rate of property tax. This means that a homeowner with a property valued at €150,000-€200,000 will pay tax of €315 for next year.

While Longford residents will have to pay more tax next year, it’s likely that everyone across the country will face some level of an increase from 2020 onwards. This is because the current system is based on valuations as of November 1st, 2013, and given property price trends since, it would indicate that properties are now significantly undervalued.

However, with prices almost doubling in Dublin in the period, if the Government was to apply the metric of 0.18 per cent on current valutions, property owners would face substantial increases in their property tax bills. With 2019 drawing ever nearer, Minister for Finance Paschal Donohoe is expected to announce a new plan for property tax in tomorrow’s budget, or shortly thereafter. It is expected that he will seek to reduce the rate of 0.18 per cent to cushion against any potential sharp increases.