Backdated payments for 67,000 pensioners to be made in first quarter of next year 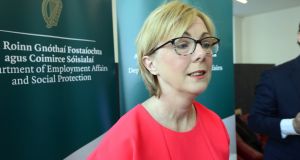 Minister for Employment Affairs and Social Protection Regina Doherty said “good progress” was being made preparing for the reviews of pensions announced by the Government earlier this year. Photograph: Cyril Byrne

About 67,000 pensioners will get letters from the Department of Social Protection at the end of October explaining how new pension rules will affect them.

Increased payments to people who will benefit from the new total contributions approach to State pensions will start in the first quarter of next year.

The higher payments for some pensioners come about as a result of the Government’s move to assess social security payments for pension eligibility on the basis of all contributions made over a working life.

To secure a full State pension, a person needs to earn 40 years of PRSI “stamps” – 2,080 weekly payments. If you accrue fewer, your pension will be reduced pro rata.

It only affects people who have hit the State retirement age of 66 since September 1st, 2012, when the government brought in more restrictive qualification bands.

At present, you need a minimum of 520 weekly PRSI payments and an average of 48 per year of your working life to claim a full pension.

That means someone who arrives in Ireland in their mid-50s can secure a full pension while another person who started work early but took time out of the workforce for family commitments or otherwise might lose out under the averaging rule.

The new total contributions approach gets rid of the requirement for a certain average number of payments over a working life.

Minister for Employment Affairs and Social Protection Regina Doherty said “good progress” was being made preparing for the reviews of pensions announced by the Government earlier this year.

“No pensioner will be worse off as a result of this review and I would expect the majority to be positively impacted by the recalculation and moved to a new, higher payment,” she said.

“Where a pensioner does not benefit from the measures introduced, they will continue to receive their existing rate of entitlement.”

The Government consultation on the new arrangement ended last month.

1 Who are Ireland’s 17 billionaires?
2 My father in a nursing home wants to gift me his house
3 Nama lends Cosgraves €15m to fund huge apartment development
4 Property firm sues engineering company over waterproofing of basement
5 Why has the pension age question suddenly become an election issue?
6 Are there annual limits on inheritances or gifts to a child?
7 Restoring pension age to 65 would cost €620m a year, claims FF
8 Stocktake: Skyrocketing Tesla may drive ‘mother of all short squeezes’
9 Health insurance: Switch often for your financial wellbeing
10 Builders finish over 21,000 homes in State during 2019
Real news has value SUBSCRIBE
Save money on international transfers